Bereaved parents, partners and siblings discuss how they cope with facing the dates that are forever imprinted on their hearts & minds following a sudden death 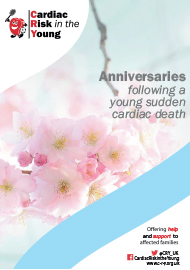 The charity Cardiac Risk in the Young (CRY) is this month [May 2016] launching a powerful new booklet for families who are learning to navigate their emotions through the seemingly endless anniversaries and “important dates” they find themselves faced with following the tragic death (whether recently, or many years ago) of a young person from an undiagnosed heart condition.

The booklet, ‘Anniversaries: following a young sudden cardiac death’ which has been compiled by CRY’s Founder and former bereavement counsellor, Alison Cox MBE, features 17 short chapters from men and women talking through their personal experience of having to find ways of coping with the often brutal reminders of what is now missing from their lives – combined with the enduring comfort they find when family members and friends show they have not forgotten the significance of an important “date”.

The booklet – which has poignantly been launched to coincide with the culmination of CRY’s own 20th anniversary campaign – has already been sent personally to over 2,000 individuals and families who have been supported by CRY over the past two decades, following the sudden death of a son, daughter, partner or sibling. The resource will also be available via online download or free, directly from CRY.

The bereavement support team at CRY developed this latest booklet in the charity’s ‘grief series’*, knowing that bereaved families often find most solace, support and guidance from others who have been through a similar experience. Indeed, since 1995, CRY has received thousands of calls from families wanting to speak to others who have suffered similar tragedies.

Alison Cox says; “If someone close to you suddenly dies anniversaries are something, that I have learnt, most of our bereaved families and friends cannot, indeed do not ever want to, escape from. Their suffering is immense but is not easy to share. Their feelings grind and jangle with the demands of everyday life as they struggle to come to terms with the inexplicable tragedy that threatens to take over their present – and future too.

“Anniversaries provide a framework within which their recollections of time spent together can be harboured. They create a predictability which confirms that the person who dies will not be forgotten. It holds the promise that their great loss will always be remembered.

“Creating traditions for an anniversary, especially those that can be inclusive, provides stability. It often significantly reduces the excoriating anxiety that people will move on, or become immune to the sensitivities of their own private suffering.

Alison adds; “Some of these days of remembrance remain private, known only to themselves. Others are days earmarked for sharing, and can lead to increasing confidence around friends and family that loved the person now missing from their lives, and who have their own needs to share their own experiences. This can anchor the management of their catastrophic grief, and relieve their harrowing nightmares.

“Although they can be painful, anniversaries crystallise memories. They become a focal point, offering precious protected time to reflect on cherished moments plucked from their brief lives spent together. Moments that are needed to serve a lifetime.”

Every week in the UK, 12 young (that is, aged 35 and under) people die suddenly from a previously undiagnosed heart condition. 80% of these young people have no signs or symptoms and so the only way to detect a potentially sinister cardiac abnormality is by having a CRY screening test.

CRY’s Bereavement Support Programme offers telephone support through volunteers who have suffered the sudden cardiac death of a child, sibling or partner and who received two years of counselling training. CRY also holds regional and national bereavement support events across the UK for families who have been affected by young sudden cardiac death.

Steph Hunter, from Haslemere, Surrey became involved with CRY following the death of her husband, Howard and then, 11 years later, her oldest son Sebastian. Howard was just 32 when he collapsed and died playing rugby. Stephanie (who had three young children under the age of 5 at the time of his sudden death) later remarried and had two further children with her husband, Rupert. But, in 2004 Sebastian (in tragically similar circumstances to his late father) also died, without warning, whilst playing rugby. He was aged just 15.

It was eventually discovered that both Howard and Sebastian died from a genetic condition known as ARVC or arrhythmogenic right ventricular cardiomyopathy. Had screening and expert pathology been available as it is today, through the CRY Centre for Cardiac Pathology, Sebastian’s death may well have been avoided.

Speaking of the launch of the new booklet, Steph comments: “The stream of anniversaries repeatedly remind us of how much more profound and sad they are than any other day of the year. We go for a walk along the beach, light candles and look after each other as a family but find that receiving a card or text or seeing an extra basket placed on the grave makes such a difference as they are always loving reminders that we are not alone in our grief.”