This time last year she couldn’t run a mile. But on Sunday one Watford woman showed just what you can do if you put your mind to it – by running an entire marathon.

Tessa Denham-Cookes from Watford, ran the 26 miles in aid of a little-known charity called Cardiac Risk in the Young (CRY).

She said: “It was really good, I loved every minute of it.”

Tessa, who finished the race in five hours and six seconds, said she had wanted to support a smaller UK-based c
harity, and therefore chose CRY, which aims to raise awareness of Sudden Cardiac Death and Sudden Death Syndrome in young people.

Despite the warm weathe 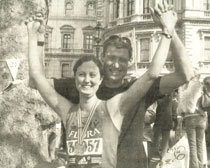 She said: “I found the conditions good, I was praying it wouldn’t rain. I didn’t find it too difficult.

“There was a brilliant atmosphere. The crowds cheer you on when you start to flag. It really kept me going.”

Tessa, who was supported on the day by her dad, brother and fiancé, Bob, raised £1,400 for charity.

The 25-year-old said: “As soon as I crossed the finish line, I felt shattered but elated at the same time.

“It was my first marathon so I just followed the training programme.

“To be able to complete it all is such an achievement.

“Last year I watched it and I just thought ‘one day I would like to say I ran the marathon.’

“The first thing I said when I crossed the finish line was ‘I want to do the next one’.”

Tessa, who works as an intelligence analyst for the Metropolitan Police, said she would recommend running the marathon to everyone.

She said: “I would encourage anyone to do it. It’s an amazing feeling.”