Brugada syndrome is a cardiac condition which causes a disruption to the heart’s normal rhythm. Specifically, this disorder can lead to irregular heartbeats in the heart’s lower chambers (ventricles), which is an abnormality called ventricular arrhythmia. Brugada syndrome was first described in the early 1990s. It is an uncommon condition in the western world but seems to be much more common among young men in South East Asia. In the western world it affects mainly young and middle-aged adult men.

It has been associated with mutations in the same sodium channel that is affected in LQTS, but this appears to account for only 1 in every 5 people with the condition. The sodium channel behaves abnormally in that movement of sodium ions into the cells is restricted. This results in particular changes on the ECG but no abnormalities in the structure of the heart. Other genes have been described as being involved in Brugada syndrome that produce calcium and potassium ion channels and proteins that interact with the sodium channel. They have, however, only been detected in a small number of carriers.

CRY Consultant Cardiologist Professor Sanjay Sharma talks about Brugada syndrome below. This video was published in 2011 – please note that the incidence of Brugada is now (July 2017) considered to be 1 in 2,000.

Most people with Brugada syndrome may have no symptoms at all. In others, the most common symptoms are blackouts. Some people may notice palpitations due to ectopic (extra) beats.

There are no associated physical signs. 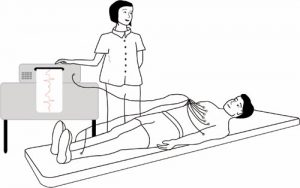 Diagnosis of Brugada syndrome involves having an ECG. The changes characteristic of Brugada syndrome may appear on the ECG continuously or come and go, or they may not show at all. Sometimes the presence of a fever or certain medications can bring out the ECG changes and this may be a period when there is higher risk of blackouts or cardiac arrest. If they do not show up on the ECG, there are tests that can make the ECG changes visible. These are called provocation tests and involve having a short injection of an anti-arrhythmic drug while you are having an ECG. The drugs most commonly used for this are ajmaline and flecainide. There is some controversy, however, about how much reassurance a negative result should give. Researchers have found that, in some carriers who have already been identified by genetic testing, changes on the ECG are not seen even with a provocation test. However, in these people the level of risk does appear to be low.

Genetic testing can be useful for Brugada syndrome, although mutations have been found in only a small proportion of people known to have the syndrome.

All carriers of Brugada syndrome should avoid certain medications that might worsen their condition. They are also advised to avoid low blood potassium levels, known as hypokalaemia, and should treat all fevers with medications that reduce their body temperature such as paracetamol or ibuprofen. If their fever remains high they should attend hospital for an ECG or monitoring as required.

It is standard practice for people who have suffered a cardiac arrest or a blackout to have an ICD fitted as this is a very successful form of protection. The tablet quinidine has been used in some patients with severe disease and an ICD already in place but its exact role remains under investigation.

Unfortunately it can be very difficult for doctors to decide how to treat those people who do not get symptoms but who have an abnormal ECG. An electrophysiological (EP) study may help to identify those people who do or do not need an ICD although there is great controversy about its true value. Research has suggested that most people with normal ECGs and no symptoms should be safe without any treatment. It is unusual for children to be at high risk.