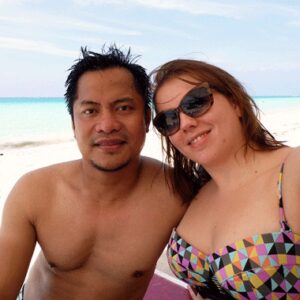 My name is Michelle Bairstow and I lost my Fiancé Roberto Ingaran on Wednesday 21st November 2012. He died of a sudden cardiac arrest at the age of 37.

Roberto was the life and soul of any party. We met in 2009 whilst working onboard the Queen Victoria cruise ship together. He is from the Philippines and his nature was kind, loving, protective, and generous. He made me feel like a princess every single second I was with him.

He loved music and that was his passion. He would always DJ in the bar on an evening at the crew parties, and I was so so very proud of him. He worked hard in the bar department and he deserved every single bit of joy.

In October 2012, we finally spent a vacation together. During our time, and because of the way our contracts fell working on the ships, we hadn’t been able to schedule our time off together until now.

So it was on 14th October 2012 that I flew to the Philippines for 3 weeks of pure bliss. We travelled around and visited the most amazing beaches in the world.

He was so happy because he was also working on opening his first bar at home. He spent so much time and effort on it, he loved it so much. He bought DJ equipment, a pizza oven, gorgeous wooden bar chairs and was constantly talking about his plans for the future. 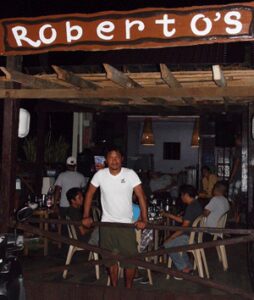 Which would become OUR future as he asked me if I would like to open a bar with him and settle our life away from the cruise ship so we could start a family. I was over the moon and couldn’t wait to start saving for our adventure.

I flew home on November 4th 2012 and we would be reunited on the cruise ship on December 13th just in time for Christmas and New Year – until then Skype would be our best friend.

It was at 21st November 2012, 1.33am (UK time), we were on Skype. He woke me up with a text, but that wasn’t unusual as I was used to being awake and Skype-ing at strange times because of the time difference.

We were on Skype for about 5 minutes when he said he had to go because his chest was hurting. I was concerned and asked him to come back soon, which he said he would.

That was the last time I saw him. He never came back.

I called his mobile phone constantly and when it wasn’t being answered I knew something was VERY wrong. At about 2.45am, somebody did finally answer. It was his sister, that’s when I knew. He was gone.

She was hysterical on the phone, I dropped my phone and it seemed to be a lifetime before it hit the floor and shattered in slow motion. I went straight into my mum’s room and cried like a child. I stayed in my mums’ bed that night, numb.

I think I slept for about one hour, but when I woke it hit me all over again, was this really happening?

The next few days I can barely remember, but I flew out there on 23rd November, for the funeral which was held on 28th November 2012. Seeing his body will be an image I will never forget for as long as I live.

That was 2 weeks ago, and it is only with the power of my friends and family that I feel I can continue. I don’t know what the future holds for me now, but Roberto was my life, and I loved him with all my heart. I will NEVER take happiness for granted again.

It is still raw for me, but I know in time I will do something to remember him here in the UK. And I would definitely like to support CRY somehow, because anything that can be done to prevent others dying in this way would bring comfort to me.