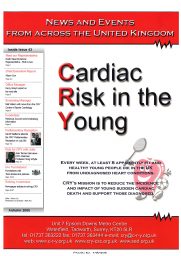 On 14th June 2008, Mike Aylott and Adam Austin began a cycle ride from Lands End in Cornwall, to John O’Groats in northern Scotland. Both were raising money for CRY in the process, in memory of Mike’s fiancée (and Adam’s friend) Jane Starr, who died suddenly on 17th May 2006, aged just 33, of a […]

Hertford resident Mike Aylott will wear a heart on his sleeves – and the rest of his body – when he runs the London Marathon in memory of his fiancee.