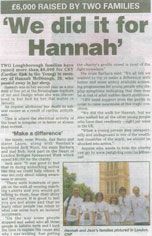 Two Loughborough families have raised more than £6,000 for CRY (Cardiac Risk in the Young) in memory of Hannah McDonogh, 20, who passed away in her sleep.

Hannah was in her second year as a student of fine art at the Birmingham Institute of Art and Design when she was discovered in her bed by her flat mates in January.

An inquest attributed her death to natural causes as a result of cardiac arrhythmia.

This is where the electrical activity of the heart is irregular or is faster or slower than normal.

Her family, mum Wendy, dad Barry and sister Laura, along with Hannah’s boyfriend Jack Nunn, his mum Barbara and dad Bob, took part in the Heart of London Bridges Sponsored Walk which raised £40,000 for the charity.

Jack said: “It was good to feel that in doing something active like this we could help others. It was not only about raising awareness or money.

“There were hundreds of people on the walk all wearing matching t-shirts and you would get talking to them, hear their story and tell yours. It is good to feel you are not alone and that so many other people can relate to what can seem such an isolated occurrence. 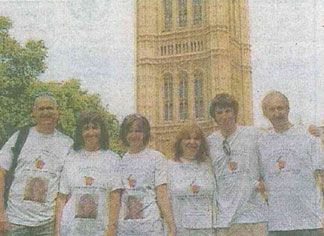 “On the way some people stopped and asked who all these people in T-shirts were and I took the time to explain the cause and why I was walking. Just getting the charity’s profile raised is most of the fight nowadays.”

His mum Barbara said; “We all felt we wanted to try to make a difference with better and more widely available screening programmes for young people who display symptoms indicating that they may be at risk of adult sudden death syndrome.

“CRY need support from the public in order to raise awareness of this tragic condition.

“We did the walk for Hannah, but we also walked for all the other young people who have died needlessly – eight per week in the UK.

“When a young person dies unexpectedly and undiagnosed in one of the wealthiest countries of the world, we should be shocked into action.”

Anyone who wants to help the charity can go to