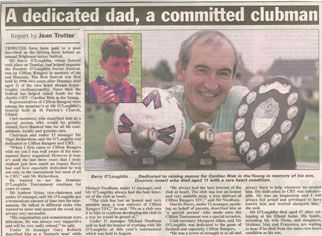 Tributes have been paid to a man described as the driving force behind an annual Brighouse soccer festival.

Mr Barry O’Loughlin, whose funeral took place on Tuesday, had helped organise the Dominic O’Loughlin Soccer Festival, run by Clifton Rangers in memory of his son Dominic. the festival was first held in 1996 two years after Dominic died aged 11 of the rare heart disease hypertrophic cardiomyopathy. Since then the festival has helped raise funds for the charity CRY – Cardiac Risk in the Young.

Representatives of Clifton Rangers were among the mourner’s at Mr O’Loughlin’s funeral held at St Patrick’s Church, Elland.

Club members, who described him as a special person who would be greatly missed, have thanked him for all his commitment, loyalty and genuine care.

“When I first came to Clifton Rangers with my son I was well aware of the tournament Barry organised. However it wasn’t until the last three years that I truly realised just how much an impact Barry had and how especially dedicated he was not only to the tournament but m most of all to CRY,” said Mr Richardson.

He wanted to see the Dominic O’Loughlin Tournament continue for years to come.

Mr Andrew Sykes, vice-chairman and under 15 manager, said Mr O’Loughlin put a tremendous amount of time into the tournament. He talked to different clubs who wanted to enter and ensured the event was always very successful. 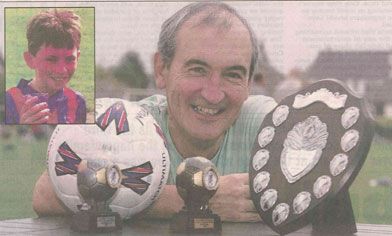 “His organisation and commitment were infectious. He was always very supportive and will be very sadly missed,” he said.

Under 16 manager Gary Roberts described him as a ‘fantastic man’ while Michael Needham, under 11 manager, said Mr O’Loughlin always had the best interest of the club at heart.

“The club has lost an honest and very amiable man, a true stalwart of Clifton Rangers YFC,” he said.

“We as a club owe it to him to continue developing the club in a way he would be proud of.”

Under 11 manager Michael Needham said he had the honour of working with Mr O’Loughlin at this year’s tournament which was held in August.

Martin Henry, under 12 manager, speaking on behalf of parents, described him as a ‘special person’ who made sure the Clifton Tournament was a special occasion.

“He was a tower of strength to us all and always there to help whenever we needed him. His dedication to CRY was unbelievable. He was an inspiration and I will always feel proud and privileged to have known him and worked alongside him,” she said.

Mr O’Loughlin died, aged 57, after collapsing at his Elland home. His family, including his wife Fiona, and daughters, Siobhan, Mez and Francesca, are waiting to hear if he died from the same rare heart condition as his son.