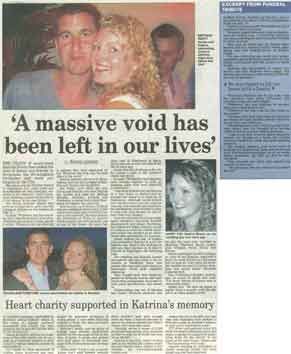 The death of much-loved Katrina Brown has rocked the lives of family and friends in Sevenoaks, her Birmingham birthplace and work colleagues in the City.

She was so popular that her funeral in Kippington last week could not accommodate all who loved her, resulting in her employer, Chubb Insurance, planning a memorial service in a City church in the near future.

Her doting husband James, who grew up in Kippington, paid a moving tribute to Katrina at her funeral on July 12.

He said: “Whenever Katrina was by my side I was the proudest man alive. Whenever she entered a room, she set it alight. Whenever she was chatting to anyone, they were captivated by her. Wherever she was, was the best place in the world.”

Katrina Beddow was born in Birmingham and was the youngest of Marilyn and Harry’s two daughters.

Her father died when she was young and Katrina was soon helping her mother look after her siblings Natasha, Miranda, Lucinda and Francesca, a caring trait which flourished throughout her short life.

Katrina grew up in Sutton Coldfield and was delighted when many of her childhood friends later moved to London to live and work. She then went to the University of Wales in Aberystwyth to study Law with Spanish, and as part of her course she spent her third year in Salamanca in Spain, where she met the love of her life 10 years ago.

James was also studying in the city for almost a year at the country’s oldest university.

He said: “We had the most fantastic nine months together in such an amazing place with such beautiful architecture.

“One of my friends had met Katrina in a bus queue in Madrid and he brought her along to an Irish bar in Salamanca. Although totally bowled over the first time I met her, I had no idea that this beautiful girl would give me the happiest, most perfect 10 years I could ever have dreamt of, and for that I feel truly blessed.”

Over the next year the couple spent weekends travelling between Aberystwyth and James’ Southampton University before Katrina moved to London to work for Chubb Insurance where she excelled as an underwriter after gaining her 2:1 honours.

James tackled his fear of heights and proposed to Katrina in a hot air balloon over Spain’s Bay of Roses in 2003 and they married in St Mary’s church in Kippington the following year.

the wedding had Spanish themes throughout and each table at the reception at Penshurst Place was named after bars and street names in Salamanca which held romantic memories.

They bought their first house together on Braeside Avenue last year, which they passionately renovated to their exact specification, and moved in.

Globetrotting was one of Katrina and James’ favourite pastimes and the last two years they travelled in Malaysia, Thailand, Egypt, Argentina, Uruguay, South Africa and Europe. 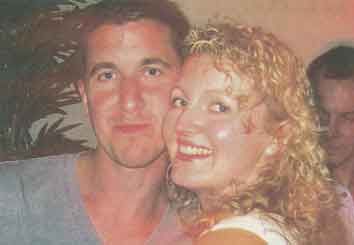 James celebrated his 30th birthday on June 28 and Katrina organised a party for many friends at a Battersea pub on June 24. They spent his birthday together at a spa in London, shopping and eating James’ favourite Japanese food.

One of Katrina’s brokers recently sent an e-mail to James that read: “I’ve never known of anyone else so universally loved.”

James said: “We have all begun to realise what a massive void she has left in so many people’s lives.”

A charity campaign established by Katrina’s doting husband James in her name has already gathered momentum and £16,000 has been raised in just 10 days for Cardiac Risk in the Young (Cry).

James decided to address the tragic cause of his wife’s death and set up a page on a donations website to raise money to reduce fatalities caused by heart defects.

Cry works to raise awareness of Sudden Death Syndrome and campaigns for proactive screening of young people. It also offers help and support to those who have lost loved ones so tragically.

Katrina’s family and an army of friends have already contributed £16,000 via the web page, which, at the time of going to press, was packed with four pages of submitted messages both of condolence and homage to her.

James said: “I had to say to people ‘please don’t send flowers’ because there wouldn’t have been enough room for them. I wanted everyone to give to the charity instead but I didn’t realised we’d raised this much.

Katrina is the only runner to have died in the British 10k London Run’s six-year history and a tribute to her features on http://www.thebritish10klondon .com

James will run in the 2007 race next year and organisers have pledged to dedicate a page in Katrina’s memory in next year’s registration packs.

ITV News International editor Bill Neely has heard of Katrina’s story and hopes to pledge his support for generating funds for the charity in her name in the near future.

Anyone wanting to contribute to James’ campaign should visit http://www.justgiving.com/katrinabrown