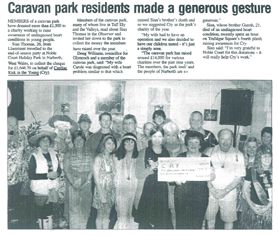 Members of a caravan park have donated more than £1,500 to a charity working to raise awareness of undiagnosed heart conditions in young people.

Sian Thomas, 26, from Llantrisant travelled to the end-of-season party at Noble Court Holiday Park in Narbeth, West Wales, to collect the cheque for £1,646.70 on behalf of Cardiac Risk in the Young (CRY).

Members of the caravan park, many of whom live in Taff Ely and the Valleys, read about Sian Thomas in the Observer and invited her down to the park to collect the money the members have raised over the year.

Doug Williams, councillor for Clyncoch and a member of the caravan park, said: "My wife Carole was diagnosed with a heart problem similar to that which caused Sian's brother's death and so we suggested CRY as the park's charity of the year.

"My wife had to have an operation and we also decided to have our children tested – it's just a simple scan.

"The caravan park has raised around £14,000 for various charities over the past nine years. The members, the park itself and the people of Narbeth are so generous." 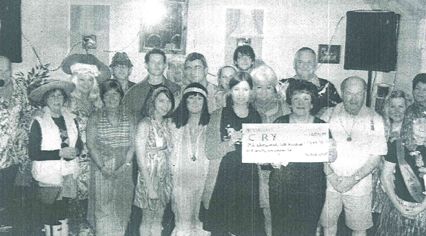