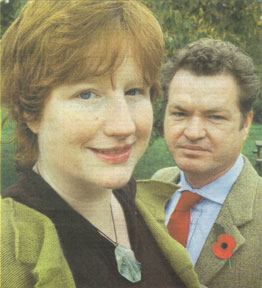 The parents of a two-year-old girl who died suddenly from a heart problem are trying to warn people about the condition.

Madeline Mulcahey was at home in Church Enstone with her parents Hugh, 42, and Jane, 44, when she started to feel unwell.

She was taken to hospital and treated for what doctors thought was asthma, but died a few hours later.

It was discovered later that she had died because muscles in her heart had thickened, a condition called Sudden Cardiac Death in the young.

Mr Mulcahey, a management consultant, said: “It was the worst thing that could happen to you, to lose your only child.

“It’s difficult to find words that aren’t hackneyed, but it was the most heartbreaking thing and it took a very long time to come to terms with it. She was an apparently fit and healthy young person, she fell ill very suddenly, and died hours later.”

“She was very grown up for her age, very mature, she just seemed a bit off colour and it looked a bit like an asthma attack. That was what she was treated for, but unfortunately that can be one of the early symptoms.”

After Madeleine’s death in December 2000, Mr and Mrs Mulcahey, who hope to have another child soon, learned of the condition which is thought to cause several hundred deaths a year.

It can affect young people with no apparent symptoms or history of bad health, and often strikes during physical activity.

Mr Mulcahey said: “We came across this charity which is raising awareness that many young people who die in unexplained circumstances have these heart problems. So we’re trying to raise awareness among the medical profession and the public that young people can have heart problems, it’s not just old people, and it’s very easy to screen them.”

The charity called Cardiac Risk in the Young (CRY), hold screenings at sports clubs, and detects a few abnormalities at every session. Routine screenings have been common in other European countries for decades, and problems are usually easy to treat.

CRY is launching a series of postcards featuring eight young people, including Madeleine, who died from undetected heart conditions.

It hopes supporters will send the cards to their MP’s to encourage them to support the campaign and join the charity’s all party parliamentary group, and already counts MP for Witney David Cameron as a supporter.