yesterday of their devastation when a third daughter mysteriously

Linforth, a "bubbly and happy" 16-year-old, had complained of

slight chest pains, but these had been passed off as indigestion.

parents, John and Evelyn, were stunned. They had lost another

daughter, Amanda, at eight weeks old to cot death in 1986. Then

at the Heart Hospital and University College Hospital in London later

concluded that Alison had died from Sudden Adult Death Syndrome.

an inquest yesterday, the Linforth's were told their daughter may have

been the victim of an extremely rare heart condition.

also have been responsible of the deaths of their two other

daughters. Tests are now being carried out on the rest of the

family, including their only surviving child, Gemma, a 20-year-old nursing

student. The findings may contribute to the debate over the

a tragedy, two is suspicious and three is murder, unless proven 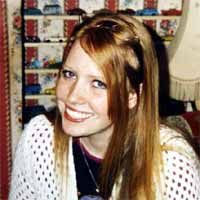 die from undiagnosed heart conditions in Britain every week.

will come into force." Mrs Linforth said yesterday. "It

Thompson said Long QT syndrome happens when there is an electrical

abnormality in the heart. It is only detectable by Electrocardiogram

(ECG) tests when people are alive. The condition is brought on by

vigorous exercise, stress and strong emotion or startling events which

make the heart beat abnormally fast or irregularly. The heart's

pumping action is interrupted, blood flow to the brain is cut off and the

person faints. In some cases – often on the first attack – the

a verdict of death by natural causes, coroner Aidan Cotter said the

specific cause of Alison's death could not be identified.

added: "Alison had hardly sat down before she collapsed in the

college, so there was no question of horseplay or fooling around. Teachers thought she had a fainting fit and acted appropriately."

the hearing, Mrs Linforth said: "We just want some closure on

Alison's death and didn't want an open verdict. To lose a third

child was just devastating. It's incomprehensible how you cope with

are days when you feel you can't go on. Alison was such a bubbly,

happy young girl. She was always smiling and that is the way we try

husband added: "When Alison died, it was like living through the past

deserve it?" But there are no answers to that. Alison's

death was a tragedy, just like the other two children we have lost."