As the University of Ulster, Coleraine, hosted a heart screening clinic for Owen Roe GAC at the weekend, the father of a Portstewart teenager who died of a heart defect is urging all parents to have their children screened.

John Lundy, whose son Aaron died of a heart condition after a football game, is involved with a cardiac charity dedicated to looking into cardiac conditions in young people.

Aaron, who was a hugely talented golfer, had earned a place at the Nick Faldo School of Golf. He died tragically at the age of 19.

John is the Northern Ireland representative for CRY, (Cardiac Risk in the Young). The charity's mission statement is to raise and increase knowledge about life threatening cardiac conditions that affect young people.

They aim to make screening accessible to all young people throughout Northern Ireland. In the first two months of the clinic at the Jordanstown campus over 150 young people have been screened.

On Saturday morning 55 young people from Owen Row and Bann Rowing Club were screened by the charity. 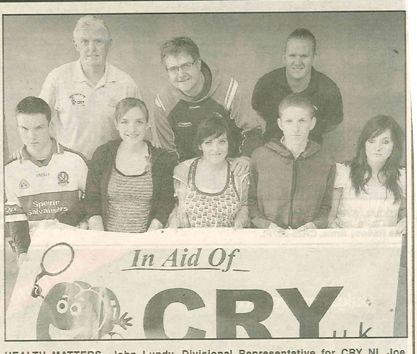 John explained: "We were contacted by the club and we were delighted that the University of Ulster, Coleraine, gave their facilities.

"the screening is a simple ECG which takes only three minutes. This test examines the electrical conduction of the heart and a print out of the heart's electrical activity is given. This reading is then sent to Dr Sanjay Sharma at the King's College Hospital in London. He will read it and advise on a course of action if need be."

https://www.c-r-y.org.uk or by calling 01737 363 222. Alternatively the next clinic will be held at Jordanstown University on Wednesday, September 12 – to book a place at the clinic log on to the website.