Leading heart charity has developed new support resources in recognition of the massive impact a young sudden cardiac death has on friends. 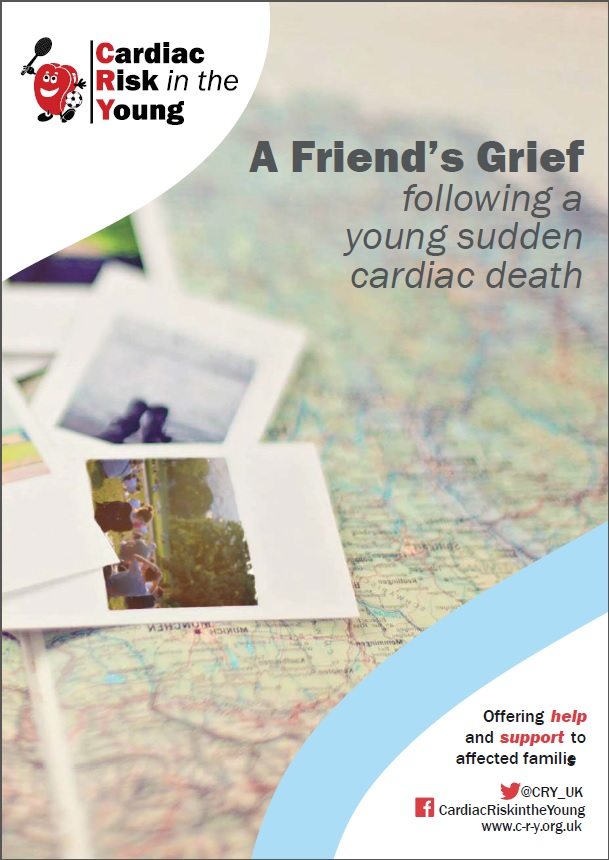 The charity Cardiac Risk in the Young (CRY) is this month [13 November 2017] launching a powerful new booklet for young people learning to navigate their emotions following the tragic and sudden death of a close friend from a previously undiagnosed heart condition.

The booklet, ‘A friend’s grief following a young sudden cardiac death’ has been compiled by CRY’s Founder and bereavement counsellor, Alison Cox MBE. It features 10 short chapters from 29 bereaved young people talking through their experience of coping with the gap their friend has left, trying to adapt their lives without them by their side and finding a ‘new normal’.

Poignantly, the authors emphasise how much talking helps address what happened and their surprise and delight when they found that parents wanted to retain contact. Many spoke of ‘living for the day’, taking nothing for granted and discovering how they value relationships more.

The booklet – which is being officially launched in the lead up to CRY’s annual Raising Awareness Week [19-26 November] – is part of a wider campaign #CRY4Friends, highlighting the grief felt by young people when they experience the death of a friend. CRY hopes this new initiative will encourage young people to share their memories and to talk openly about their grief. The resource will also be available to read online or order for free, directly from CRY: www.cry4friends.org.uk.

The bereavement support team at CRY developed this latest booklet in the charity’s ‘grief library‘,* knowing that bereaved people find most solace, support and guidance from others who have been through a similar experience. Indeed, since 1995, CRY has received thousands of calls from people just wanting to speak to others who have suffered similar tragedies.

Alison Cox says; “This powerful and deeply sensitive booklet articulating the thoughts and feelings of the sudden death of a fit and healthy special friend explains the ferocity of the impact of the loss. We are all born into our relationships but have the freedom to choose our friends. There is a subsequent independence in friendship and – especially for those that have been friends since childhood – a raft of memories created especially during maturity.

“Adolescence can be a rocky ride and having a trusted friend to discuss new experiences with and confront difficult decisions that need to be made can greatly reduce anxiety. Having a special friend to talk to helps to stabilise the fast-changing world that seems to lurch around them which often affects their confidence and leaves them vulnerable. A good friend can provide a haven of security and suddenly losing them there can have a catastrophic effect on a young person.”

Every week in the UK, 12 young (that is, aged 35 and under) people die suddenly from a previously undiagnosed heart condition. 80% of these young people have no signs or symptoms and so the only way to detect a potentially sinister cardiac abnormality is by having cardiac screening. CRY believes that every young person should have the choice to be screened, and offers a national screening service where anyone aged 14-35 can access free cardiac screening.

CRY’s Bereavement Support Programme offers both medical and emotional support to families who have been affected by a young sudden cardiac death. CRY offers individual telephone support through volunteers who have suffered the sudden cardiac death of a child, sibling or partner and who have undergone two years of counselling training so that they can offer support to other people who have been affected by a tragedy.

CRY also offers group support, so that bereaved families and friends can connect with one another. In tandem with the new booklet, CRY has launched a private Facebook group for young people who have lost a friend to a sudden cardiac death, to connect and share their feelings with others who have experienced the loss of a friend and be part of a support network for one another. This is in addition to private support groups for bereaved mums, dads, siblings and partners, as well as a group which can be joined by anyone who has lost a young person to a sudden cardiac death. CRY also holds national bereavement support events and memorial walks for families and friends who have been affected by young sudden cardiac death.

Broadcaster & sports commentator, John Inverdale is a Patron of CRY and was invited to write the introduction to this new booklet. John first became involved with CRY following the death of his friend and team-mate, Howard English in 1995. Father-of-three, Howard was just 32 when he collapsed and died playing rugby. John (as well as former England international, Simon Halliday – also a CRY Patron) were playing alongside Howard. He died beside them on the pitch.

John says; “Every case is different, but every case is the same. I was playing rugby 30 years ago when a good friend collapsed and died alongside me. One week on the team sheet, the next another unexplained and terrible story.

“My daughter played hockey at school with a girl who was destined for great things – she might well have been part of the golden Rio Olympic set-up – but one night she went to bed and just never woke up. And, so it goes…

“The young people who may well pick up this booklet or seek solace through this new campaign and website will do so because they understand. They will understand what it’s like to have someone who is an integral part of your life be there one moment and not the next. The anger and the hurt. The bewilderment and the sense of injustice. And more than anything the sense of unreality. Someone who was so healthy, so vibrant and dynamic and so alive. How? Why?”

John adds; “That’s where CRY comes in. A support mechanism, but also an organisation to drive the research that is needed to try to reduce the number of these tragedies. This booklet tells so many tales, but in the end, it tells just one. A tale of loss of a friend, but more importantly of love.”