As part of our raising awareness efforts in summer 2006, and to mark England’s efforts in the football World Cup, CRY held a raffle with a magnificent signed England football shirt as the top prize!

Other prizes in the raffle included a brand new 21 speed mountain bike; an original watercolour painting by CRY supporter John Bennett (whose work has previously been featured on CRY Christmas cards); and £100 of Thomson holiday vouchers. 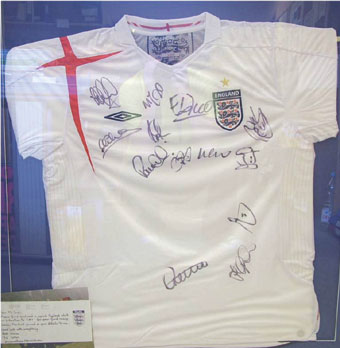 The shirt carries 13 signatures, is framed, and comes with a Certificate of Authenticity signed by the Football Association.

The shirt was kindly donated to CRY by Dennis and Barbara Merchant, in memory of their son Ian (left), who died from Wolfe Parkinson White Syndrome (WPW) aged 22.

Third prize was an original watercolour painting of a village scene (left), by John Bennett.

John has painted a number of pictures for CRY in memory of his daughter Laura (right), who died suddenly, aged 13.

Runners-up prizes in the raffle included £100 of Thomson holiday vouchers, and various pieces of CRY merchandise. 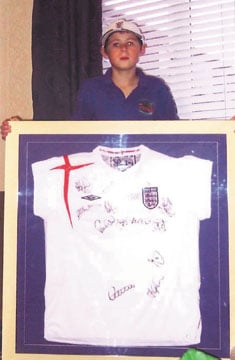 Congratulations to all the prize winners, and our thanks to everyone who supported CRY by purchasing tickets in the raffle, or selling tickets on our behalf. Over £1000 was raised overall from the raffle.