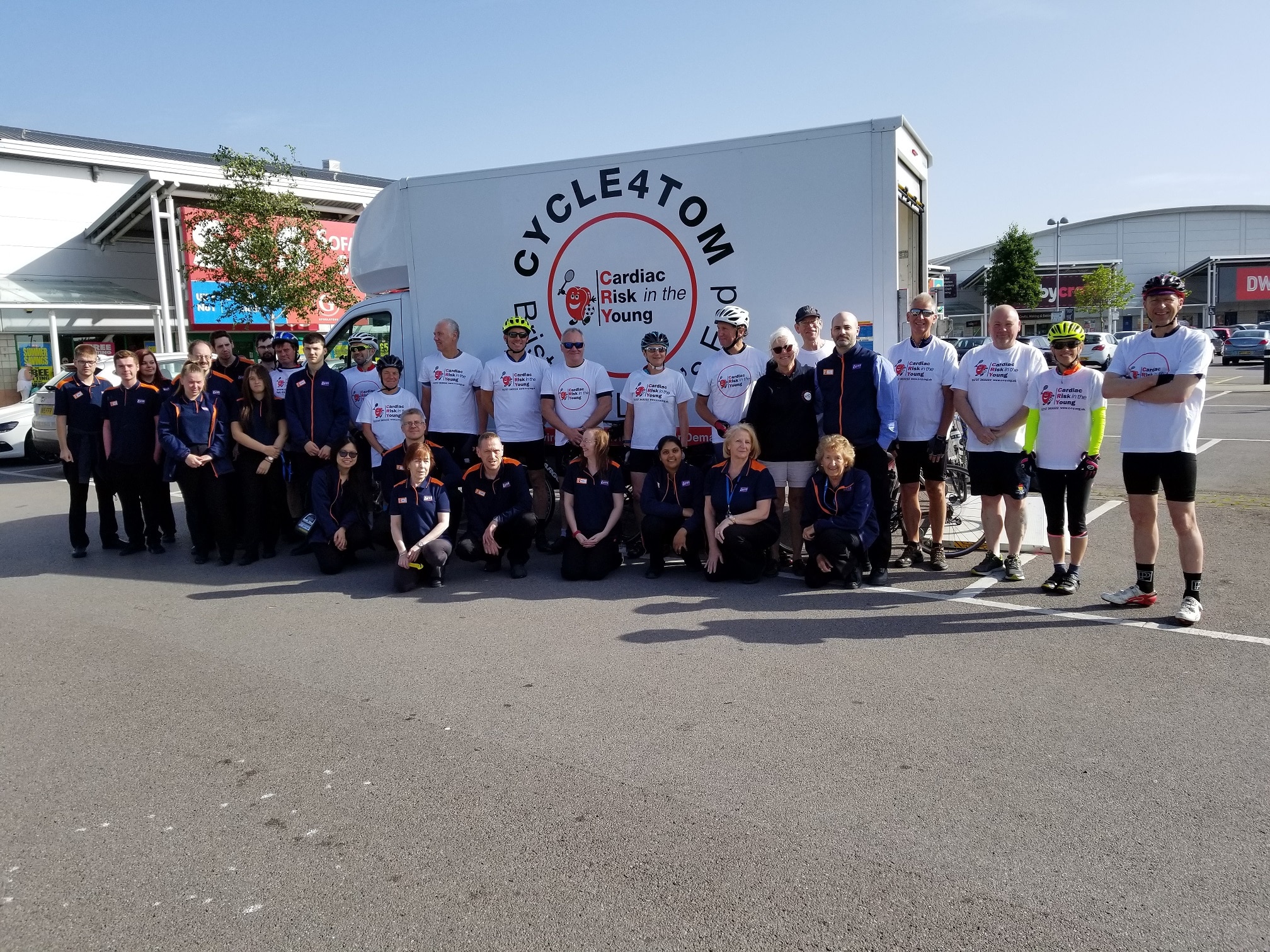 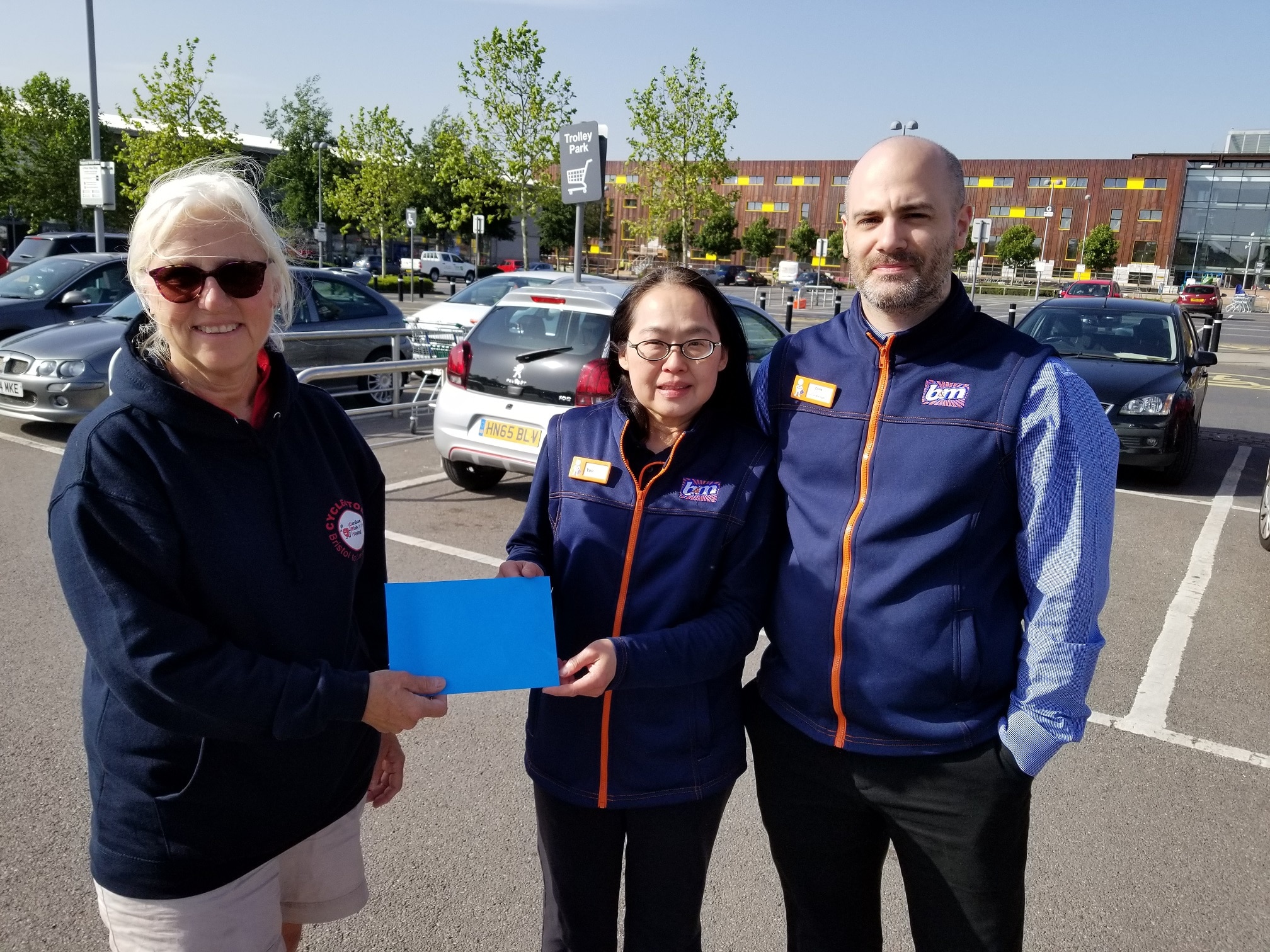 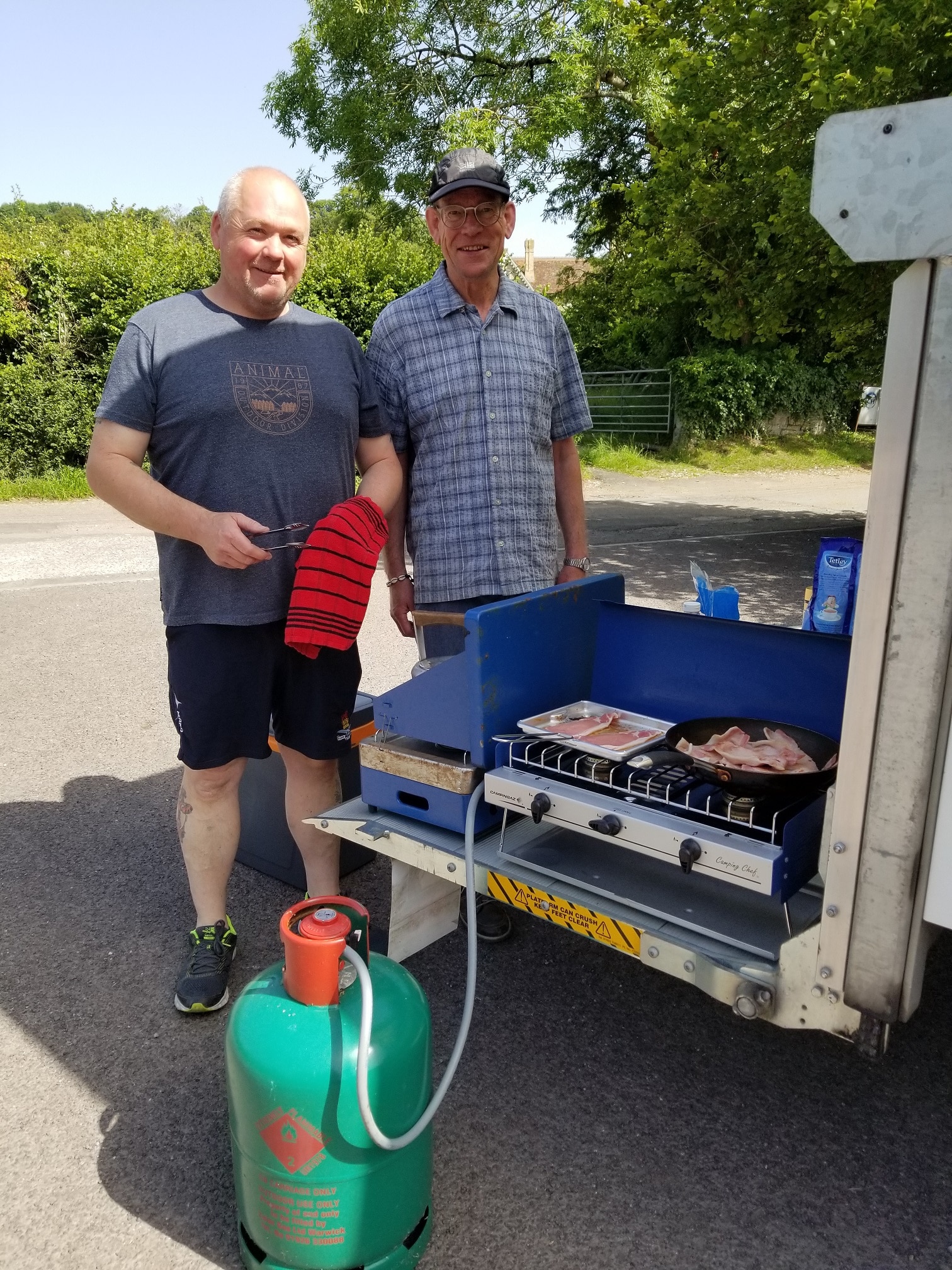 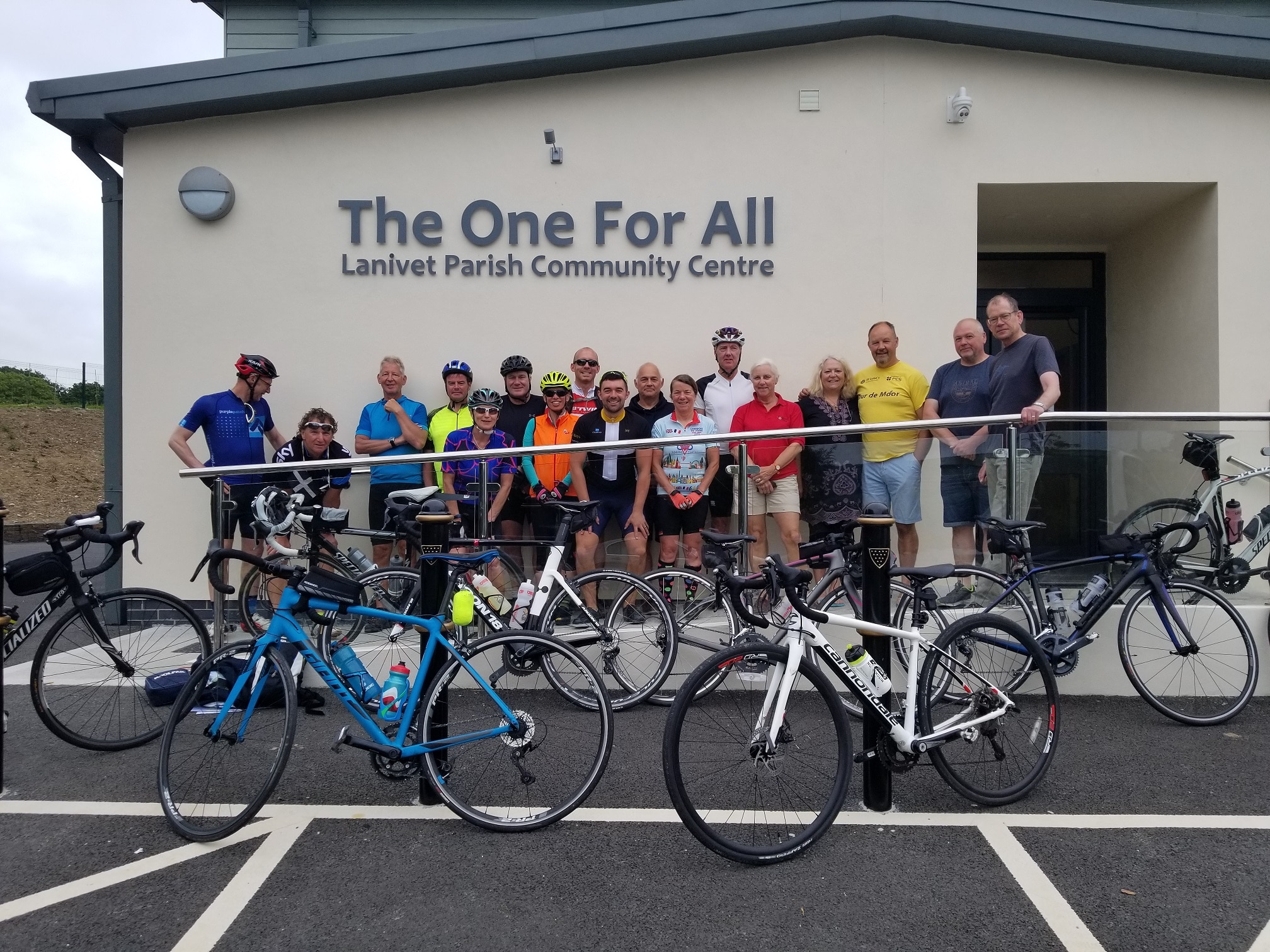 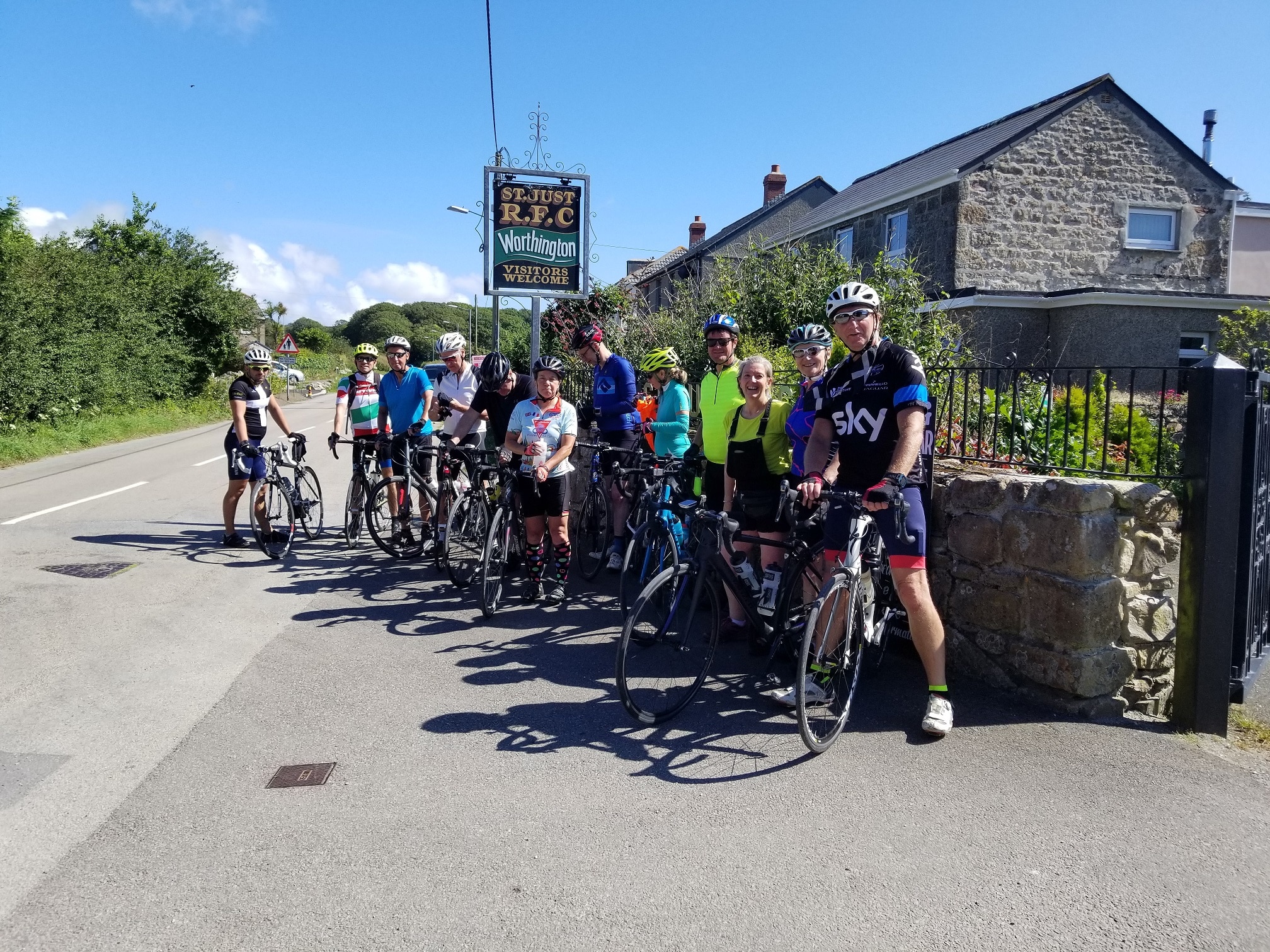 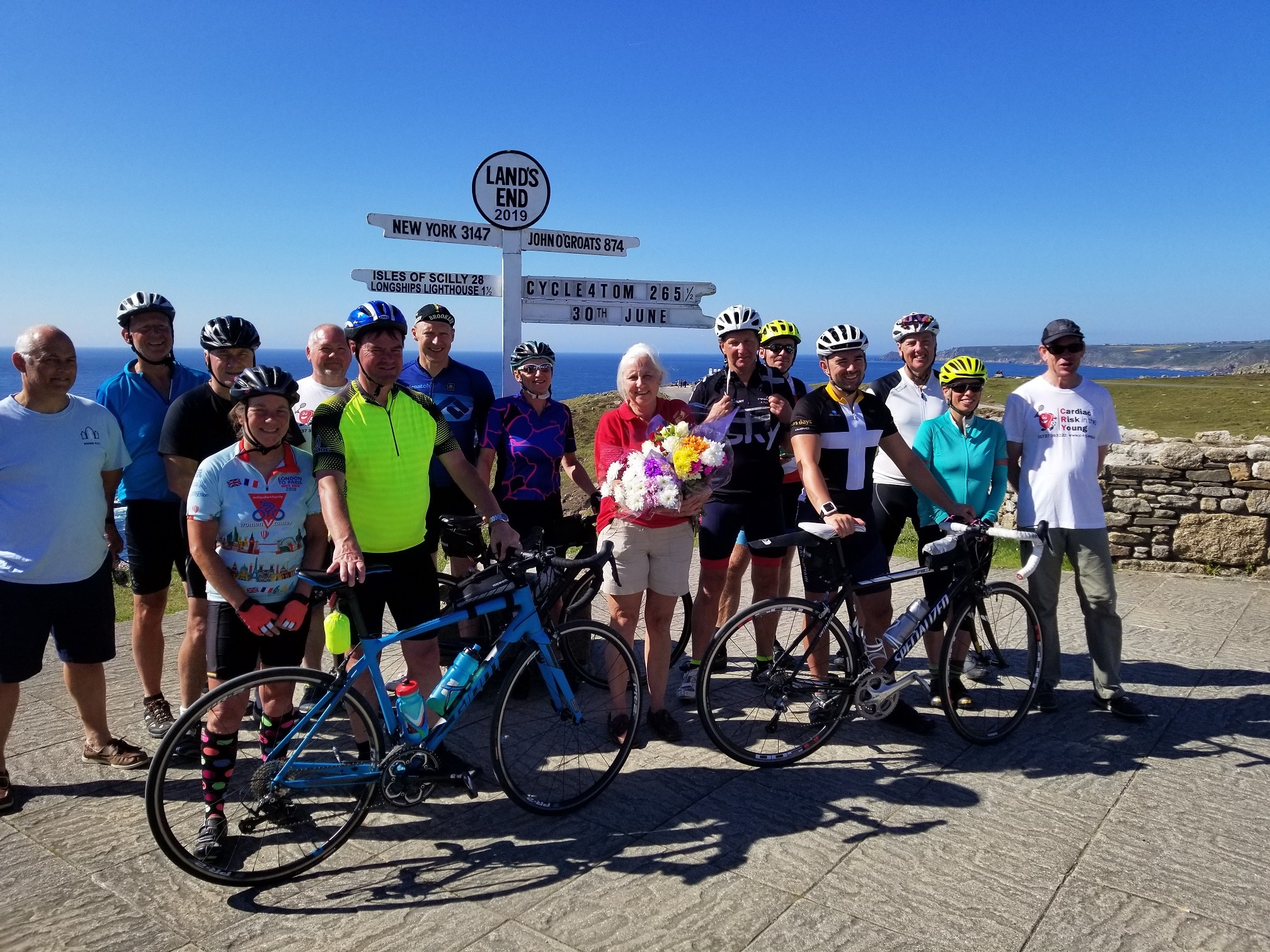 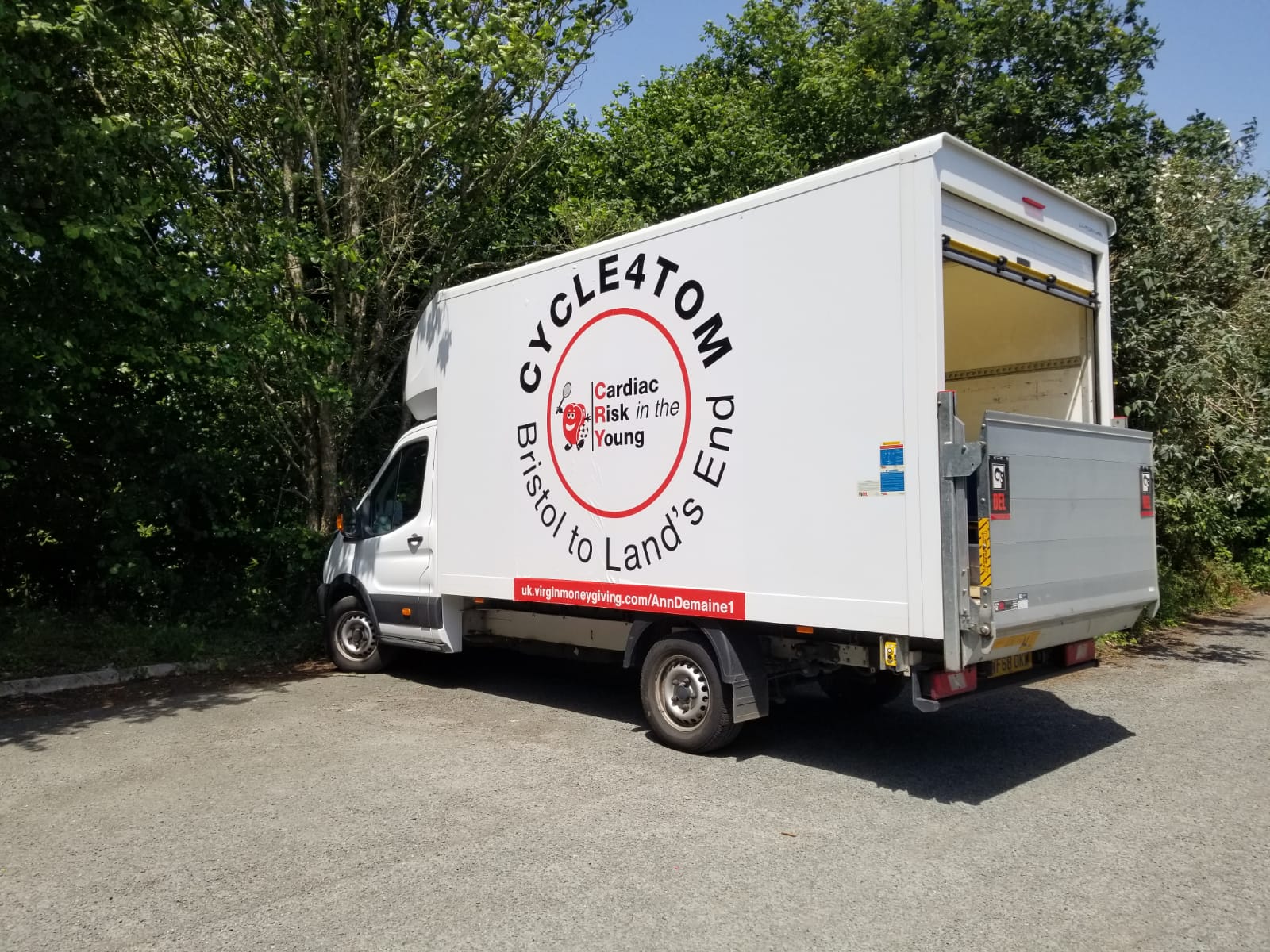 Pleased to say the cycle ride has been completed and was a great success.

12 like minded people who knew Tom Demaine came together to ride from Bristol to Land’s End in his memory, raise awareness of deaths from hidden heart conditions in young people and to raise the funds for free heart screening for young people in East Cornwall.

Planning started 6 months ago after a chance meeting in Lidl’s and included practice cycle rides and awareness days a Coop, Certini bicycles and the Dartmoor Classic Sportive.

It was the hottest weekend of the year, so the cyclists did brilliantly to keep to the itinerary in good cheer despite big hills and searing heat.

They started at B and M Imperial Park, Bristol where Tom had started as deputy manager just before his death. Manager Chris Robinson and his staff gave a warm send off with a generous donation of food and presentation of £250 collected by staff.

Lunch was provided by a volunteer Sally Lewis from Chumleigh who had picked up a request for help from facebook at the stop at West Monkton.

The staff at the Buckerell lodge hotel looked after us brilliantly overnight in our overnight stop in Exeter, giving space and ice to physio Rob Durant to provide free massages to the riders.

On day 2 the weather was just as hot and the Salmon Leap cafe at Buckfastleigh gave our van and support team space by the stream in their car park to cook the bacon baps for elevenses, bacon provided by Paul Bray butchers of Tideford.

Owner Lee ‘Jack’ Russel of Jack’s Gym, Saltash, hosted lunch where lots of friends and well wishers joined in to cheer the team on at their half way mark. Huge thanks to Theresa Prinn and Sandra Mitchell for the money from a raffle as well as food provided along with many others!

The leg of the journey was particularly tough. Climbing up to St Neot’s whilst picking up the first and only puncture. Duly mended, we did not need to use any of the bike spares kindly donated by Certini bicycles.

Running a bit late, the team were unable to meet with Scott Mann MP North Cornwall and went straight to the most amazing welcome at Lanivet Parish Community Centre greeted by Michelle and Richard Gibbons. Many thanks to Scott Mann, who waited 2 hours for the cyclists, but had a good chat Ann Demaine and Jayne Smith, Aspirations Coordinator (and #CRY4TOM supporter) at Bodmin College. Scott, along with Sheryll Murray MP East Cornwall,  has signed the Pledge in Parliament to provide a national heart screening programme for young people.

Lanivet provided the most amazing facilities for chilling out and we all slept well on the mattresses kindly provided by Julie Ball from Cornwall Scouts. Michelle and Rich made and served an evening meal and cooked breakfast to the team who set off on a much cooler and flatter Sunday morning en route to Land’s End.

Tom’s old Manager, Chris Letheridge, of B and M Redruth, and his staff provided lunch for the team before their final and by now hot and demanding last leg of the journey along the North Cornwall coast. He coupled this with a collection from the store and presentation by Tom’s old colleagues.

The final leg gave us stunning scenery, a couple of stops to enjoy the views and take on water before their penultimate stop at St Just RFC to meet old friends. Louise Snelson herself had delivered CPR to her husband to save his life a couple of years ago.

The sun was still shining when the crossed the finish line together, all team members having supported each other. One minute’s silence was held to remember Tom, and Helen Ralph made a short but moving speech. Each person also had their own personal challenge this weekend and we were pleased to be welcomed by a family who had lost their son and brother to SADS as well as the cyclists’ families.

If you haven’t already had the opportunity to donate, the team’s giving page will be open for a few more weeks.

Huge thank you to the cyclists:

B and M, Saltash, Liskeard, Bristol and Redruth