It's estimated that as many as 400 apparently healthy young people die each year from sudden adult cardiac death syndrome (SADS).

Around 700,000 people in the UK suffer from arrhythmia – a disturbance in the heart's rhythm – where severity can range from a minor health inconvenience to a fatal rhythm disturbance.

Miss Johnson announced that a new body would be set up to raise awareness of the conditions and advise the Department of Health on future policy.

It could lead to a new National Service Framework (NSF) chapter setting out the standards and models of care for such conditions.

The group will be chaired by the National Clinical Director for Heart Disease, Dr Roger Boyle. Voluntary and professional organisations including Cardiac Risk in the Young (CRY) and the British Cardiac Society will be invited to join. Patients and families of patients will also have a strong voice in the work.

"I am delighted to be chairing the new advisory group on arrhythmias and sudden cardiac death. I am sure that by our awareness raising efforts and by influencing future policy, lives will be saved."

"It is devastating for families when a young, apparently healthy person dies suddenly without warning."

"The majority of people with the underlying conditions do not have any symptoms for all or most of their life. However, the condition can lead to sudden and unexpected death, often in early adulthood."

"It's vital that we attempt to understand this condition further. The new group that I'm announcing today will help both raise awareness and drive future policy."

"We've already shown our determination to tackle coronary heart disease through the publication of the National Service Framework (NSF). The creation of this group to advise future policy on arrhythmia and sudden cardiac death progresses this work further."

"The prospect of a new NSF chapter setting out the standards and models of care for these conditions marks a major step forwards for cardiac patients in England."

"I would like to pay tribute to the efforts of organisations like CRY, the British Cardiac Society and Dari Taylor MP who have worked tirelessly to raise awareness of the issue."

Symptoms a patient with arrhythmia might experience include palpitations, dizziness and blackouts or they may occur only as a 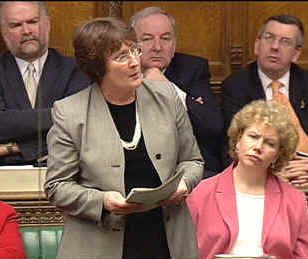 People who will benefit from the work include:

those at risk of sudden cardiac death – an estimated one in 500 young adults with hypertrophic and dilated cardiomyopathies; an estimated 112,000 people with disorders of the electrical conduction system within the heart, such as Long QT syndrome or Wolff-Parkinson-White syndrome; and those requiring pacemakers for slow heart rates.

"I am delighted that the substance of my Bill has been adopted by the Department of Health, and we will see new guidelines and standards to prevent these terrible and unnecessary deaths."

"We know from research and experience that we can prevent these deaths – but now we need to put that knowledge to work. Far too many cases are slipping through the net undiagnosed, misdiagnosed, or diagnosed but not treated."

"I have seen the tragedy of sudden death first hand, when the 22 year old son of a good friend collapsed suddenly and died. How do families cope with the trauma of a sudden, young, preventable death?

"Today's announcement will help prevent such deaths and I am delighted that the Government has taken this terrible condition seriously."

And Alison Cox, Founder and Chief Executive of CRY, said:

"Today's announcement will save young lives. It is a huge relief, and I am very grateful to Dari Taylor and all those who have supported this campaign. The sudden death of an apparently fit and healthy young person is absolutely devastating to a family, but this is very encouraging."

1. Two main conditions cause sudden cardiac death in young people: hypertrophic cardiomyopathy and dilated cardiomyopathy. This equates to about 200-400 deaths each year (around eight people a week). Other causes of sudden cardiac death include other cardiomyopathies and disorders of the electrical conduction system of the heart that can cause arrhythmias, for example Long-QT syndrome or Wolff-Parkinson-White syndrome. Atrial fibrillation is another cause, affecting one per cent of the population and rising to 10 per cent in the elderly.

2. The terms of reference for the new group will include writing a communications strategy to raise awareness in primary care of signs and symptoms of conditions leading to sudden cardiac death. It could also make recommendations about how deaths are certified in cases of sudden cardiac death.