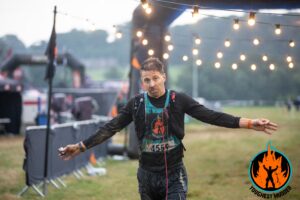 It was delayed by more than a year due to the pandemic. It was then delayed by half an hour on the night due to uncooperative cows on the course. At 8.30pm on Saturday evening Europe’s Toughest Mudder finally got underway and so began a night and morning of adventure.

Before I get into the race though, it’s probably worth sharing a bit about my preparation. On arriving at the site and with registration complete, I was directed to a 3×3 metre patch of grass to set up my “pit area”. The benefit of these areas are that you can access them at the end of every lap to refuel, change socks, use the toilet, and so on. However, a quick glance around and it became apparent I was the novice here. Every one of my neighbours had a large gazebo or tent, cooking facilities, some even had beds. I’d brought a camping chair and two Bags for Life. Fingers crossed it didn’t rain or all of my belongings were getting wet.

Two minutes later with my chair in place and my pit area fully set up, I pulled out the trainers I intended on racing in – a grippy pair of Asics trail shoes. Despite being a few years old now and not having run in them this year (just favouring regular running trainers) looking round everyone had trail shoes on and so my confidence grew a little. I’d got something right. And then I went to put them on I had an oh crap moment, they were a size too small. No idea how. I’ve been a size 13 for a long time and these were a 12. Back in the Bag for Life they went and I’d have to make do with my regular running trainers.

Now thankfully the race went a bit better than my kit preparation. Wearing a headtorch and a strobe light, me and about 400 others completed the initial “sprint” lap. Some of these 400 were solo racers, like me, and others were in two- and four-people relay teams. In order to spread the field out the obstacles don’t start opening until the second lap and so the sprint lap is an opportunity to get a quicker lap under your belt. That being said, I was careful not to sprint the sprint lap and settled into a pace I thought I might be able to sustain for 12 hours.

Over the 12 hours I found quite a lot of time to think and it dawned on me this race was an both a physical challenge – you need to get your body round the course and over, under and through obstacles – as well as being a mental challenge. Some obstacles presented a mental challenge, such as running through hanging electrical cables knowing you’re going to get electrocuted. Or crawling through a tunnel filled with tear gas. Or plunging into icy water. And some obstacles carry a penalty if you can’t complete them, such as downing a shot of hot chilli sauce or walking barefoot over Lego pieces. They’re not really physical challenges, they’re more mental. And then, in addition, I found there was an internal mental challenge too – to keep going, to keep the intensity up, to be quick in the pit areas, to not feel sorry for myself. I was forever talking to myself. And this mix of physical and mental, the variety of it, meant I found it quite easy to just focus on the present task rather than be overwhelmed by the prospect of 12 hours.

At about 3am the batteries in my headtorch died and so after stumbling round the rest of lap, I made it back to the pit area and reached for my spare batteries (one of the few things in my Bags for Life). The problem was, as I was shaking so much with the cold, I couldn’t get the fiddly AAA batteries out of their cardboard let alone into the headtorch. And as I was unable to persuade any friends or family to be my “pit crew” I went and visited the volunteers who were there to help unassisted solo runners. They were lovely, fixed up my headtorch, tied it to my vest and gave me some Haribos for good measure.

After about the fourth or fifth lap, I was starting to figure out strategies for most obstacles. So for example, the route I would always take through the Mud Mile or how to best descend the 3-storey high Mudderhorn. I was also learning when it was easier to do an obstacle with others around me for help. Devil’s Beard was five consecutive cargo nets that I needed to crawl under and on your own it was exhausting. But with others around I could buddy up, lifting the nets for them and they’d do the same for me in return. As a solo runner that meant I was speeding up or slowing down to arrive at certain obstacles at the same time as others.

The other big help was the number volunteers on the course, enthusiastically cheering and providing banter all night. I think I’d rather have been running than stood next to an obstacle all night so big shout out to all of those. It’s amazing how a smile and a quick “LOOKING GOOD!” an really keep the spirits high.

At about 3.30am I was starting to do the maths on how many more laps I could get in before the 8.30am finish. Either a comfortable two laps or an uncomfortable three. I decided to push for the latter. At about 5am the sun came up and that was an amazing moment. As well as a bit of warmth it signalled the start of the end… albeit three and a half hours away. And then when I set off for the start of a lap at 7am I knew I’d be able to complete that one before the cut off. It felt great doing each obstacle on that lap knowing that I wouldn’t have to do them again.

I ended up doing 7 laps, or 42 miles. I came into the race thinking 30 miles might be achievable and so that distance genuinely surprised me. I probably got electrocuted more than 50 times and completed more than 100 obstacles. It also meant I finished in the top 10 percent. Shortly after finishing I received an email which said congratulations, because I completed 7 laps that meant I qualified as a “contender” for the upcoming 24-hour World’s Toughest Mudder in Las Vegas this November – an opportunity to race against the pro’s for prize money. It’s not really what I wanted to hear in the immediate aftermath of this race, at a time when I couldn’t really walk. However, a few days later having reflected and having regained my mobility again, the acknowledgement of a job well done is what I’ll take from the email and I’ll leave the pro’s to it in November. No one’s going to be up for sponsoring me again just three months later!

And finally, on the topic of sponsorship and the real why behind this challenge, I’ve exceeded my £2,000 target and that now means more than 100 school children can be screened for heart conditions. Still, it’s not too late though and if you like what you’ve read and want to help make that number even bigger then please, pop over to Just Giving and pledge what you can – https://www.justgiving.com/fundraising/project-cry