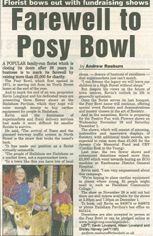 A popular family-run florist which is closing its doors after 36 years in business is to mark its farewell by raising more than £5,000 for charity.

The Posy Bowl, which first opened in 1971, is moving out from its North Street home at the end of the year.

And to mark the end of an era, proprietor Kevin Longland and his dedicated team are presenting three flower shows at the Hailsham Pavilion, which they hope will raise enough money to buy cardiac equipment for people in Hailsham.

Kevin said the dominance of supermarkets and floral delivery services had made it more difficult for smaller florists to survive.

He said: “The arrival of Tesco and the planned two-way traffic system in North Street is the straw that broke the camel’s back.

“It has made our position as a florist virtually untenable.

“The people of Hailsham see Hailsham as a market town, not a supermarket town.

“In a town like this you have lots of local shops – dozens of bastions of excellence – that supermarkets just can’t match.

“I can foresee the legacy we will leave our children is a High Street without shops.”

But despite his views on the future of town centres, Kevin’s outlook on life is generally optimistic. 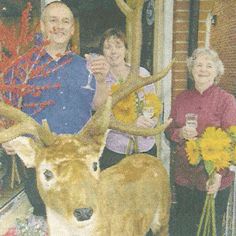 Once the florist serves its last bouquet, the Posy Bowl name will continue, offering special event floristry and demonstrations and master classes in the art of floristry.

And in the meantime, Kevin is preparing for the Festive Fund with Flowers shows on Wednesday November 28 and Saturday December 1.

The shows, which will consist of amusing, instructive and innovative displays of floristry, with additional trade secrets, are expected to raise more than £5,000 for the Jeremy Cole Memorial Fund and CRY (Cardiac Risk in the Young).

Kevin said: “I am very empassioned about this campaign.

“We’re hoping to place cardiac equipment in places where young, fit people might need it, such as Hailsham Community College.”

The show on November 28 is sold out but there are still tickets available for the shows at 2.30pm and 7.30pm on December 1.