Over a hundred people were expected to walk across 20 feet of burning coals during this fire walking experience.

David Gregory took up the Fire Walk challenge and hoped to raise a couple of hundred quid for both the Blood Pressure Association, organisers of the event and Cardiac Risk in the Young and Action on Salt and Health.

All my sponsorship was gathered online at www.justgiving.com/davidgregory

How did it all go? 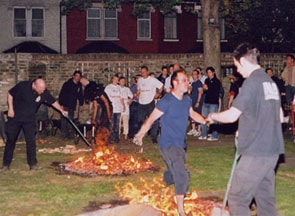 7.30 prompt “Big Cliff” from Blaze Firewalking called the group into the function room of The Frog and Forget Me Not pub off Tooting High Street. The crew had whipped all the chairs so I looked forward to a couple of hours of floor sitting endurance.

“I’m going to show you how it is possible to change your mind” Cliff bellowed. My back already grumbling and a spot of cramp setting into my feet was almost enough to ‘change my mind’ and hot foot it down to the bar – boozing pre fire walk had been strictly forbidden, however it was reassuring to see a few of the Medical School students whacking back “squash” whilst watching the Blaze team unload their van – sack after sack of chopped wood and a whole lot of turf rolls to set up on.

Two hours of “mind changing” later we were off down to the Beer Garden to examine the remnants of what must have been two spectacular fires, now piles of fiercely glowing embers. There was no doubt it was hot and uncertainty crept into most of our minds. The larger coals were racked to the side and then shovel loads of the embers were scooped into wheelbarrows and duly scattered along the Fire Walks – two lanes of pristine turf. These were then flattened down to prepare an even surface however during the flattening the intense glow from the coals diminished – possibly reassuring many of the walkers that it no longer looked as though on the first step we would instantly frazzle. 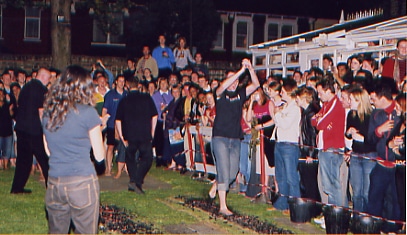 Time to go. Cue lots of whooping and cheering. Cliff looked each walker straight in the eye, he was “offering us the opportunity to walk on fire” and shouted the same question: “What’s your name”? followed by “Are you ready to go?” then he stepped aside and one by one we were off. Some ran like billy ho others, myself included carefully paced across. I was 3/4 along when I felt the sting of a burning ember between my toes and remembered that I was supposed to be moving at speed. Oh oh.

Later that night after removing the blood pressure monitor and being transferred from A&E to a trolley in the hospital corridor I asked Jan if she managed to get some good photos. “Yes dear” she replied, “but I think we’ll give it a while before we develop them”. Only kidding 🙂 take with a pinch of salt

If you are thinking about organising a charity Fire Walk to support the work of CRY contact them. It could be the shortest sponsored walk you’ll ever do. I’m now planning a to complete a fundraising event involving power kite buggying with Jon at Chilli Kites. After getting professional instruction and training I hope to power kite surf along the Thames to raise awareness and money.

There are a number of theories which have been put forward to explain firewalking. Any or all may be the explanation for a particular event.

Firewalking is usually done in a religious or spiritual context. This would tend to reduce the level of pain experienced by firewalkers without affecting the amount of physical damage done to the feet.

Some firewalkers put forward mystical explanations of why firewalking is possible without serious physical harm. A few skeptics have challenged these firewalkers to stand on hot metal plates instead of coals. Others have pointed out that making such a challenge in the belief that the firewalker would be seriously hurt is of dubious morality.

Fire walking is often portrayed by new age gurus and personal development salesmen as an example of what is possible when your mind is pointing in the right direction. Of course, you can get your mind in the right state only by offering time, money or devotion to the belief system or course offered in the sales brochure or hold writings.

In fact, while fire walking is an impressive feat, it has a perfectly rational explanation. There is no need to achieve a heightened state of awareness, or to rely on “mind over matter”. It is however, something of a test in your faith in physics.

Think of baking bread. It is possible to open the oven and place your hand inside for a considerable time, despite the fact that the oven is perhaps 200 degrees Celsius. You can even briefly touch the bread, but you would quickly learn that it was a mistake if you were to touch the metal or ceramic container that the bread was in.

The difference comes from the ability of various substances to conduct, or transfer heat. Air is a very poor conductor of heat. Bread is better, but not as good as metal which conducts heat with great efficiency.

Wood does not conduct heat particularly well. The average human foot will happily be in contact with a glowing wood coal for about a second before sufficient heat is transferred to burn the flesh. The average step takes about half a second so for most people, so it is possible to take two steps with each foot before a dangerous amount of heat has built up.

In fact the name “fire walking” is a misnomer. No one can walk on fire. It is possible to walk only on hot coals, without flames being present.

Keep in mind though that fire walking is not inherently safe. These coals are hot – perhaps 500 degrees Celsius – and they are dangerous. It is not at all uncommon for people to be burned by the coals and painful blisters are the result. Even sceptics do not suggest that anyone undertake a fire walk without the help of someone experienced in the activity.