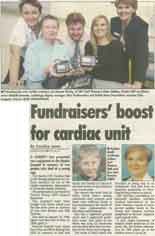 A charity has presented new equipment to the Maelor hospital in memory of two people who died at a young age.

The charity CRY (Cardiac Risk in the Young) presented two 24-hour monitors for use in the cardio-respiratory department at Wrexham Maelor Hospital.

The presentation was made by Doreen Harley, CRY's inquest supporter.

The monitors have been bought with funds raised over the last three years in memory of Lisa Jane Browne and Karl Thomas.

Penycae football team raised more than £2,000 on Boxing Day in 2005 in memory of Karl and family and friends of Lisa have donated money in her memory over recent years. 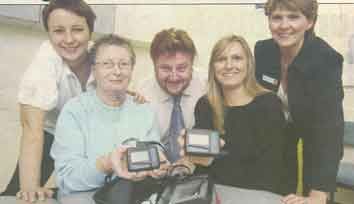 The money has been held in CRY's North Wales cardiac equipment fund account until there were sufficient funds to buy something for the benefit of the local communities in Flintshire and Wrexham.

Lisa was a registered general nurse and a registered paediatric nurse. The cause of her death was Long QT Syndrome and she died when she was startled by her alarm clock ringing.

The cause of Karl's death was recorded as being due to an arrhythmia. Karl died from no apparent symptoms or warnings during a lesson at school.

CRY provides counselling for bereaved families, provides medical information on the most common causes of unexpected cardiac death in the young and donates medical equipment to doctors' surgeries and hospital units.

It also raises awareness of Sudden Death Syndrome in the under 35s.