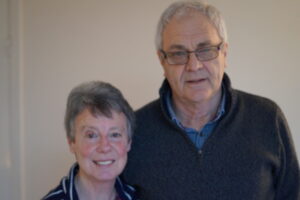 On Saturday 21st July our eldest son, Tony, contacted us to say that our daughter-in-law, Rachel, had been trying to get us by telephone to say that Ashley had suffered a heart attack and was in Frenchay Hospital, Bristol. It was inexplicable to us at the time, as he had just undertaken rigorous physical exercise as part of his police training and had run two London Marathons in the previous two years.

We drove down to Bristol as quickly as possible and I for one fully expected to see him “wired up” and attached to monitors. It was only the evening before that we had spoken to him to wish him a “Happy Birthday” and an enjoyable evening at home with his family.

On arrival at the hospital we quickly became aware that all was not well and found out that Ashley had died suddenly at home without warning. He was sitting on the sofa, writing up notes following a placement during the week before, and simply closed his eyes and stopped writing in mid sentence. Rachel had desperately tried CPR, as did the paramedics on arrival, but to no avail. We later found out that he had died of a condition known as Hypertrophic Cardiomyopathy.

The day Ashley died our world fell apart, it was unbelievable that someone so fit and healthy could just sit on the settee and close his eyes and die.

On his last London Marathon that we watched he had reached Big Ben and running alongside him was a big red blob. When I asked my sister what the charity was she said that it looked like CRY. We both wondered what that stood for. How strange that 2 weeks before he died I saw a television programme where a couple were explaining how their son had died suddenly and that they were involved now with CRY.

Finding CRY helped us realise that we are not alone that there were people there that helped us and it gives us something to focus on. We have met many people in the 7 years since we joined, people who we can say have become true and trusted friends.

We now want to give something back and help out in any way we can. A new chapter in our CRY lives is about to start this year with Walk and Talk in Gloucestershire, we are so looking forward to meeting new people who like us love walking and want a social day out with people in similar circumstances to us.