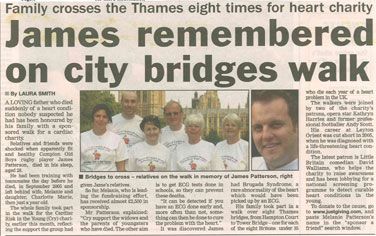 A loving father who died suddenly of a heart condition nobody suspected he had has been honoured by his family with a sponsored walk for a cardiac charity.

He had been training with team-mates the day before he died, in September 2005 and left behind wife, Melanie and daughter, Charlotte Marie, then just a year old.

The whole family took part in the walk for the Cardiac Risk in the Young (CRY) charity, earlier this month, reflecting the support the group had given James’s relatives.

So far, Melanie, who is leading the fundraising effort, has received almost £2,500 in sponsorship.

Mr Patterson explained: “Cry support the widows and the parents of youngsters who have died. The other aim is to get ECG tests done in schools, so they can prevent these deaths

“It can be detected if you have an ECG done early and, more often than not, something can then be done to cure the problem with the heart.”

It was discovered James had Brugada Syndrome, a rare abnormality of the heart which would have been picked up by an ECG.

His family took part in a walk over eight Thames bridges, from Hampton Court to Tower Bridge – one for each of the eight Britons under 35 who die each year of a heart problem in the UK.

The walkers were joined by two of the charity’s patrons, opera star Kathryn Harries and former professional footballer Andy Scott.

His career at Leyton Orient was cut short in 2005, when he was diagnosed with a life-threatening heart condition.

The latest patron is Little Britain comedian David Walliams, who helps the charity to raise awareness and has been lobbying for a national screening programme to detect curable heart conditions in the young.

To donate to the cause, go to

http://www.justgiving.com and paste Melanie Patterson’s name in the ‘sponsor a friend’ search window.