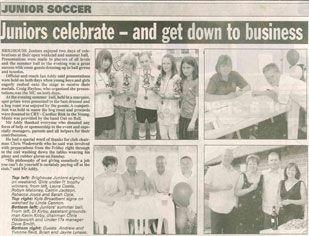 Brighouse Juniors enjoyed two days of celebrations st their open weekend and summer ball. Presentations were made to players of all levels and the summer ball in the evening was a great success with some guests dressing up in ball gowns and tuxedos.

Official and coach Ian Addy said presentations were held on both days when young boys and girls eagerly rushed onto the stage to receive their medals. Craig Hydhoe, who organised the presentations, was the MC on both days.

At the evening summer ball, held in a marquee, spot prizes were presented to the best dressed and a hog roast was enjoyed by the guests. A competiti9on was held to name the hog roast and proceeds were donated to CRY – Cardiac Risk in the Young. Music was provided by the band Out on Bail.

Mr Addy thanked everyone who donated any form of help or sponsorship to the event and especially managers, parents and all helpers for their contribution.

He had a special word of thanks for club chairman Chris Wadswoth who he said was involved with preparations from the Friday right through to the end washing down the tables wearing his pinny and rubber gloves on Sunday.

"His philosophy of not giving somebody a job you can't do yourself is certainly paying off a the club," said Mr Addy.