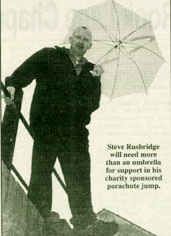 Barber Steve Rushbridge is hoping to overcome his

will be flying at 2500 feet above Devon.

Steve, of Badcocks Barbers in Frome has agreed to

Memorial Fund, which supports Cardiac Risk in the Young, a national charity

which raises awareness of hidden heart problems in young people.

To help him in his challenge, Steve is looking

for a major sponsor to enable him to book the jump. He can then go on to

raise as much money as possible through sponsorship.

at Badcocks Barbers shop in From

If you would like to do something similar to

Steve then further details of charity parachute jumps and other fundraising

ideas can be found at the CRY Web site, https://www.c-r-y.org.uk/parachute_jump.htm