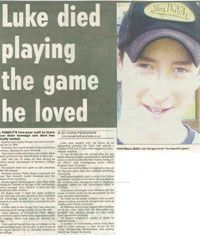 A family’s two-year wait to learn how their teenage son died has finally ended.

Stephen and Hayley Worgan lost their football-mad son in 205.

Yesterday, they heard details of their son’s final moment, playing the sport he loved.

They had it confirmed that it was sudden adult death syndrome that robbed them of their son.

Luke was just 16 when he died during an indoor soccer tournament at Swansea College, Tycoch.

His parents were too upset to talk yesterday after the inquest.

Swansea coroner Philip Rogers expressed the hope that research would continue into the causes of the condition.

Swans legend Robbie James, who died while playing for Llanelli at the age of 40, and former Swan’s manager Terry Yorath’s 15-year-old son Daniel are other victims.

Mr Rogers said: “I hope the wider publicity from this case will alert people to this condition and encourage people to carry out further research so work can be done to prevent this sort of thing.”

Cardiac Risk in the Young (Cry) has called for screening of all young athletes to cut the risk.

Luke’s paents, of Whitehorn Place, Sketty, threw their support behind the organisation after the tragedy, which took place on October 22, 2005.

Their son left home that day at 8.30am in his beloved Manchester United shirt to play in one of the regular Skool’s Out on Saturday sessions at the college.

Luke, who worked with his father as an apprentice ceramic tile fitter, was among a number of 16 and 17-year-olds engaged in three-minute matches.

“!t was during the rest period after his last match that he became unresponsive, having laid down on the floor near his team mates, resting on his elbow,” said investigating police officer Sergeant Kath Pritchard.

It was not until he failed to respond to the call for the next game that they realised something was wrong.

Staff unsuccessfully tried to revive him before paramedics arrived on the scene. He was taken to the accident and emergency unit at Singleton Hospital, where he was pronounced dead at 11.07am.

Consultant pathologist Wyn Williams said the cause of death could not be ascertained by post-mortem examination.

He ruled out an earlier collision with another player as being connected and gave the cause as sudden adult death syndrome.

Dr Williams said it could happen after exertion or at any other time. And he discounted any prospect that advance checks on Luke would have uncovered anything.

Mr Rogers recorded a verdict of death by natural causes.

A number of fund-raising events have been held in Luke’s memory to raise money for the Cruse Morgannwg bereavement care charity, which has helped the family.