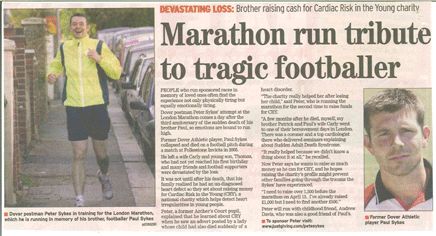 People who run sponsored races in memory of loved ones often find the experience not only physically tiring but equally emotionally tiring.

Dover postman Peter Sykes' attempt at the London Marathon comes a day after the third anniversary of the sudden death of his brother Paul, so emotions are bound to run high.

Former Dover Athletic player, Paul Sykes collapsed and died on a football pitch during a match at Folkestone Invicta in 2005.

He left a wife Carly and young son, Thomas, who had not yet reached his first birthday and many friends and football supporters were devastated by the loss.

It was not until after his death, that his family realised he had an undiagnosed heart defect so they set about raising money for Cardiac Risk in the Young (CRY), a national charity which helps detect heart irregularities in young people.

Peter, a former Archer's Court pupil, explained that he learned about CRY when he saw an advert posted by a lady whose child had also died suddenly of a heart disorder. 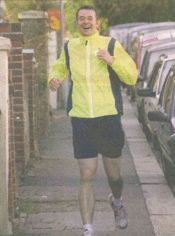 "The charity really helped her after losing her child," said Peter, who is running the marathon for the second time to raise funds for CRY.

"A few months after he died, myself, my brother Patrick and Paul's wife Carly went to one of their bereavement days in London. There was a coroner and a top cardiologist there who delivered seminars explaining about Sudden Adult Death Syndrome.

"It really helped because we didn't know a thing about it at all," he recalled.

Now Peter says he wants to raise as much money as he can for CRY, and he hopes raising the charity's profile might prevent other families going through the trauma the Sykes' have experienced.

Peter will run with childhood friend, Andrew Davis, who was also a good friend of Paul's.