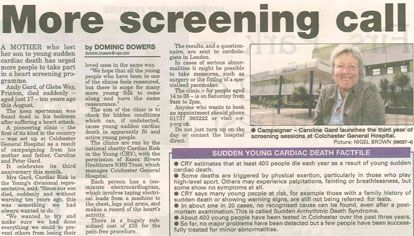 A mother who lost her son to young sudden cardiac death has urged more people to take part in a heart screening programme.

The keen sportsman was found dead in his bedroom after suffering a heart attack.

A pioneering clinic – the first of its kind in the country – was set up at Colchester General Hospital as a result of campaigning from his mother and father, Caroline and Peter Gard.

It celebrates its third anniversary this month.

Mrs Gard, Cardiac Risk in the Young's divisional representative, said: " Since our son died, suddenly and without warning ten years ago, this was something we had always wanted to do.

"We wanted to try and make sure we had done everything we could to prevent others from losing their loved ones in the same way.

"We hope that all the young people who have been to one of the clinics feels reassured, but there is scope for many more young folk to come along and have the same reassurance."

The aim of the clinic is to check for hidden conditions which can, if undetected, cause young sudden cardiac death in apparently fit and active young people.

The clinics are run by the national charity Cardiac Risk in the Young (CRY), with the permission of Essex Rivers Healthcare NHS Trust, which manages Colchester General Hospital.

Each person has a ten-minute electrocardiogram, which involves taping electrical leads from a machine to the chest, legs and arms, and makes a record of the heart's activity.

There is a hugely subsidised cost of £35 for the pain-free procedure. 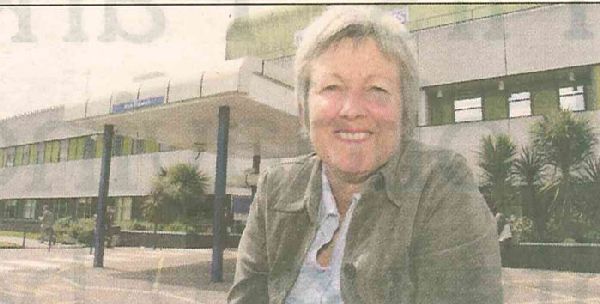 The results, and a questionnaire, are sent to cardiologists in London.

In cases of serious abnormalities it might be possible to take measur5es, such as surgery or the fitting of a specialised pacemaker.

Do not just turn up on the day or contact the hospital direct.

CRY estimates that at least 400 people died each year as a result of young sudden cardiac death.

Some deaths are triggered by phy6sical exertion, particularly in those who play high-level sport. Others may experience palpitations fainting or breathlessness, but some show no symptoms at all.

CRY says many young people at risk, for example those with a family history of sudden death of showing warning signs, are still not being referred for tests.

In about one in 20 cases, no recognised cause can be sound, even after a post-mortem examination. This is called Sudden Arrhythmic Death Syndrome.

About 400 young people have been tested in Colchester over the past three years.

So far, no major problems have been detected but a few people have been successfully treated for minor abnormalities.