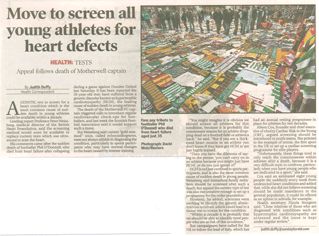 A genetic test to screen for a heart condition which is the most common cause of death in young athletes could be available within a decade.

Leading expert Professor Peter Weissberg, medical director of the British Heart Foundation, said the screening method would soon be available to replace current tests which use ultra-sound to scan the heart.

His comments came after the sudden death of footballer Phil O'Donnell, who died from heart failure after collapsing during a game against Dundee United last Saturday. It has been reported the 35-year-old may have suffered from a genetic disorder known as hypertrophic cardiomyopathy (HCM), the leading cause of sudden death in young athletes.

The death of the Motherwell FC captain triggered calls to introduce regular cardiovascular check-ups for footballers, and last week the Scottish Football Association said it would support such a move.

But Weissberg said current 'gold standard' tests, called echocardiograms, were not always reliable in diagnosing the condition, particularly in sports participants who may have normal changes to the heart caused by intense training.

"You might imagine it is obvious we should screen all athletes for this condition, because it is probably the commonest reason for an athlete dropping dead on a football field or athletics track," he said. "But it you see a thickened heart muscle in an athlete you don't know if they have got HCM or are just highly trained.

"Then you have the dilemma of saying to the person 'you can't carry on as an athlete because you might just have HCM', or do you just ignore it?" 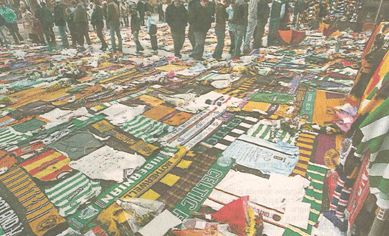 HCM is not just confined to sports participants, and is also the most common cause of sudden death in young people. Weissberg said immediate family members should be screened after such a death, but argued the current type of test was also not sensitive enough to set up a programme for the wider population.

However, he added, scientists were working to identify the genetic abnormalities involved, which could lead to a blood test to screen for the condition.

"Within a decade it is probably that we should be able to identify most people who are at risk of this condition."

But campaigners have called for the UK to follow the lead of Italy, which has had an annual testing programme in place for athletes for two decades.

Alison Cox, founder and chief executive of charity Cardiac Risk in the Young (CRY), argued screening should be introduced to youth teams. She pointed to the example of tennis, the first sport in the UK to set up a cardiac screening programme for elite players.

"Unfortunately, these things tend to only reach the consciousness within athletes after a death, because it is a very difficult topic to confront, particularly when you have young people who are dedicated to a sport," she said.

Cox said an estimated eight young people die suddenly every week from undetected heart conditions and added that, while she did not believe screening should be mandatory in the general population, it could be offered as an option in schools, for example.

Heath secretary Nicola Sturgeon said: "Close relatives of those who are diagnosed with conditions such as hypertrophic cardiomyopathy are screened and the issue is kept under regular review."