A mother who lost her son to an undiagnosed heart defect has crossed London's eight bridges in his memory.

Vera Looker joined many others on the walk, remembering their lost loved ones.

Mrs Looker's son Michael was a healthy, football-mad 21-year-old who died suddenly, with no warning of a heart problem.

The charity, Cardiac Risk in the Young, organised the five-mile walk covering eight bridges over the Thames.

Mrs Looker of The Dale, Widley, said: "The eight bridges signify the number of apparently fit and healthy young people under the age of 35, who die every week in the UK from undiagnosed heart defects.

"It was a very emotional day and was well supported.

"All the walkers wore a white T-shirt, many with a picture and name of the person close to them who had died. Two people even completed the walk on crutches.'

About 400 people took part in the walk for the charity Cry, which helps parents who have lost a child to sudden arrhythmic death syndrome, known as SADS, and related diseases. It is thought to kill eight young people in the UK every week. In one in 20 cases, 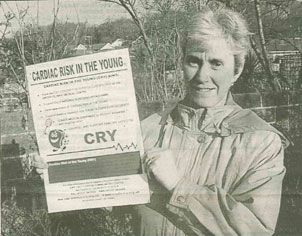 no cause of death can be found, even after examination by a cardiac pathologist.

Mrs Looker wants young people to receive a routine heart scan before they leave school in a bid to detect problems. She also want to let other parents know that help is available if they have lost a child in the same way she did.

'People are beginning to know more about it, but it is always nice to remind them that we are here,' she said.

The CRY charity was founded in May 1995 to raise awareness of Cardiac Risk in the Young.

The charity offers family conference and support days for parents who want to find out more information about Sudden Cardiac Death and other Sudden Death Syndromes.

It also offers support to those who have suffered a loss through a network of affected families and counselling.