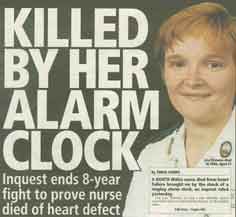 Nurse Lisa Jane Browne died from heart failure brought on by the shock of a ringing alarm clock, an inquest ruled yesterday.

The 27-year-old, who died in 1998, suffered from an undiagnosed heart abnormality which caused her hear to stop beating after the sudden shock of her 6am alarm call.

The condition affects the electrical system of the heart, which can cause sudden unexplained death in young people.

Her mother, Doreen Harley, 58, of Connah’s Quay, always suspected her daughter died of the hereditary disorder and campaigned for the inquest into her death to be re-opened. At the original inquest in August 1998, the coroner recorded an open verdict.

Yesterday, a second inquest was held in Warrington where the coroner for Cheshire, Nicholas Rheinberg, ruled that Lisa died from heart failure due to LQT2. He recorded a verdict of death by natural causes.

Speaking after the inquest, Mrs Harley said she hoped her eight-year battle to discover the real cause of her daughter’s death would help save the lives of others.

Following Lisa’s death, it was discovered that her father Terry, 61, her sister Rachel, 33, and her nephews Jack,, nine, and Adam six, all had the illness. They have all received treatment and are living normal lives.

Mrs Harley called on the Government to provide screening for young people to diagnose heart problems.

She said: “Long QT Syndrome has affected five members of our family over three generations. An ECG test could well have saved Lisa’s life.

“All of the causes of sudden cardiac death, many of which are genetic, are treatable once diagnosed and most people are able to live a relatively normal life.

“There are at least eight deaths a week to sudden young cardiac death, the majority of which could be prevented if there was a national screening programme for all teenagers at around the age of 14.

“How many more young people have to lose their lives to sudden young cardiac death before the Government will agree to finance the necessary ECG screening?”

The inquest heard that Mrs Browne, who worked at the Countess of Chester Hospital, suffered from extreme exhaustion in the last three years of her life.

She complained on a number of occasions to her GP, who prescribed her a low dose of an anti-depressant which she took for a few months from October 1996.

The inquest heard the anti-depressant should not be taken by anyone suffering from Long QT syndrome.

Mrs Browne’s husband Stuart, 38, of Ellesmere Port, Cheshire, told the inquest he found his wife dead in bed at around 7am on January 10 1998 after she failed to wake up for work.

He said: “Lisa Browne died suddenly in bed, probably after her alarm went off, waking her suddenly.”

The coroner said he believed it was very important to reopen Mrs Browne’s inquest in light of the new evidence into the cause of her death.

Mr Rheinberg said: “The importance of these particular findings and facts, I don’t think can be over-estimated.

“Lisa suffered a sudden death at a very young age and I think it very likely had her condition been diagnosed, she would be alive today.

Had it not been for the dedication of her family in finding out the cause in relation to Lisa’s death, then clearly Rachel and her children and Mr Harley would be very much at risk.

“It is a condition which, if undiagnosed, can lead to unexplained death.

“If diagnosed, it can be treated and death avoided.”

Mrs Harley said she would continue to campaign alongside the organisation Cardiac Risk in the Young.

She said: “Eight years has been an exceptionally long time for our family but the inquest has given us the answers we so desperately needed.

“We will now finally be able to bring about closure following Lisa’s tragic death.”

What is Long QT Syndrome?

Long QT Syndrome is an uncommon, hereditary disorder of the heart’s electrical rhythm that can occur in otherwise-healthy people.

the duration of the QT interval is a measure of the time needed for recharging the electrical system after each heart beat.

Sufferers have a long QT interval than healthy people during physical exercise, intense emotion – such as fright, anger or pain or a startling noise.

When this occurs, no blood is pumped out from the heart, and the brain quickly becomes deprived of blood, causing symptoms of sudden loss of consciousness, such as fainting, and possibly sudden death.

It can also occur during sleep or arousal from sleep.

Symptoms begin in pre-teen to teenage years, but may occur in newborns to middle age.

This syndrome strikes one in 7,000 people. In America, it causes 4,000 sudden deaths in children and young adults each year.

It can be diagnosed by examining a person’s electrocardiogram (ECG).

Drugs known as beta blockers control the condition in nearly 90% of cases. Some patients need a pacemaker and implantable defibrillator.