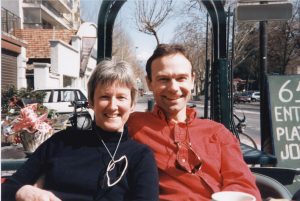 We live in Frinton-on-Sea, on the Essex coast, a place famous for its fish and chip shop and “soon to be” pub! It’s a good place to live for a family of sports lovers such as ourselves, with tennis, squash, golf and cricket clubs all on the doorstep, not to mention a beautiful sandy beach.

With a Vet as a husband it is perhaps unsurprising that our household includes 2 black Labradors, 4 assorted cats, 3 tortoises and a pond full of goldfish, newts and frogs. Our 18-year-old daughter Cathy is studying locally for her imminent ‘A’ Levels.

When our son Andy died in July 1997, two days before his 18th birthday, we were in total shock and disbelief. Surely fit, healthy, sporty young people did not die of a heart attack – just like that, with no warning at all. He had never suffered any ill health and was considered by his friends to be one of the fittest amongst them. Yet we were told that he had suffered a massive heart attack.

We heard about CRY six months after his death and at last found caring people who could offer us some kind of explanation and the startling realisation that we were not alone. In fact, we felt very angry that so many other families were being affected by the same tragedy, and yet it appeared that the very people who should have been able to help us were ignorant of the incidence of sudden cardiac death. Do all these lives really mean so little?

Andy loved all sports especially hockey and had represented Essex at Under 16 level. He had just finished his ‘A’ Levels at Colchester Grammar School, where he had been made a prefect, despite only having attended the school for one year. Everyone loved his mature easygoing nature. He seemed to have the gift of being able to get on with people of all ages whatever their interests.

We started fundraising for CRY last Easter because we wanted to give something back for all the support we had received. The whole community here responded in a way that has amazed us. As a family, we have been astounded and comforted by this. It matters so much that others want to help us change things. 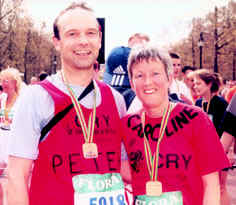 We would like to think that an ECG programme will help to prevent other families from going through what we all know to be the parents worse nightmare. The raising of awareness of the conditions and the education of all those involved with young people and with healthcare, are also of paramount importance.

CRY has made such an important contribution in this area as well. Awareness has certainly been raised in the Frinton district – everyone has heard of CRY now! We will continue to support the CRY team as much as we can, and wish to thank them for all their hard work, without which none of us would have found out about what had happened to our children.

If we all keep on shouting, someone in government must surely eventually soon hear what we are saying.

If you would like to contact one of our Representatives or a Bereavement Supporter please call the CRY office at 01737 363222 or e-mail cry@c-r-y.org.uk and we will put you in touch with someone who may be able to help you.