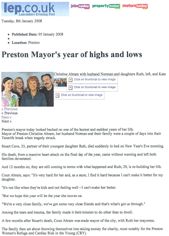 Preston's mayor today looked back on one of the busiest and saddest years of her life. Mayor of Preston Christine Abram, her husband Norman and their family were a couple of days into their Tenerife break when tragedy struck.

His death, from a massive heart attack on the final day of the year, came without warning and left both families devastated.

And 12 months on, they are still coming to terms with what happened and Ruth, 29, is re-building her life.

Councillor Abram, says: "It's very hard for her and, as a mum, I find it hard because I can't make it better for my daughter.

"It's not like when they're kids and not feeling well – I can't make her better.

"But we hope this year will be the year she moves on.

"We're a very close family, we've got some very close friends and that's what's got us through."

Among the tears and trauma, the family made it their mission to do other than to dwell.

A few months after Stuart's death, Councillor Abram was made mayor of the city, with Ruth her mayoress.

The family then set about throwing themselves into raising money for charity, most notably for the Preston Women's Refuge and Cardiac Risk in the Young (CRY).

Now, just over half way through her stint, the mayor has met the stars at the Radio One Big Weekend, attended the Queen's garden party, been a catwalk queen herself, and attended countless civic events.

Everything is logged in a journal Councillor Abram keeps on her laptop computer which she plans to look back on when she steps down in May. 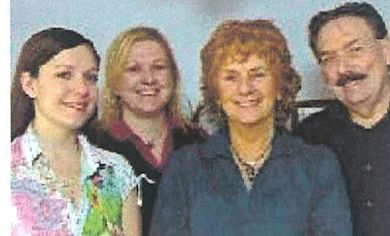 She says: "It's helped us with being so busy and it's helped us as a family, the fact we're putting so much into the CRY charity.

"It has helped, definitely, but I'm finding it very difficult now.

"When you go to certain events it's a bit emotional but you've got to carry on.

"Lots of things give you flashbacks and you re-live it. There's a lot of times you don't feel like doing this but you've got to keep going.

"We've been driven on by it and if the money we raise helps to save one young life, it's all been worthwhile.

"Mostly, you're only the mayor once and it's your opportunity to stamp your mark on it and use the office of mayor to highlight these charities and raise their profile.

"It's also about keeping the fun in fund-raising."

With more than 200 engagements already under her belt, the mayor is looking forward to continuing the fundraising drive into 2008.

A host of high-profile events are planned including a Stars In Their Eyes night and a charity cricket match.

March will bring a trip to Almelo in Holland to celebrate 60 years of the two places being twinned.

And the mayoral year will be crowned with a glamorous ball at the Guild Hall with guests dressed to impress for a Hollywood-themed night.

But first, the Abram's enjoyed a well-earned rest over Christmas when they stepped out of the spotlight for a few days, spent time with their family at home and raised a glass to Stuart.

She says: "We'll never get over it and we'll never forget him."