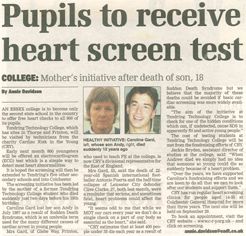 An Essex college is to become only the second state school in the country to offer free heart checks to all 800 of its pupils.

Tendring Technology College, which has sites in Thorpe and Frinton, will be visited by technicians from the charity Cardiac Risk in the Young (CRY).

Early next month 800 youngsters will e offered an electrocardiogram (ECG) test which is a simple way to detect most heart abnormalities.

It is hoped the screening will then be extended to Tendring’s five other secondary schools and into Colchester.

The screening initiative has been led by the mother of a former Tendring Technology College student who died suddenly just two days before his 18th birthday.

Caroline Gard lost her son Andy in July 2997 as a result of Sudden Death Syndrome, which is an umbrella term used for the many different causes of cardiac arrest in young people.

Mrs Gard, of Glebe Way, Frinton, who used to teach PE at the college, is now CRY’s divisional representative for the East of England.

Mrs Gard, 53, said the death of 22-year-old Spanish international footballer Antonio Puerta and the half-time collapse of Leicester City defender Clive Clarke, 27, both last month, were a reminder that serious and sometimes fatal, heart problems could affect the young. 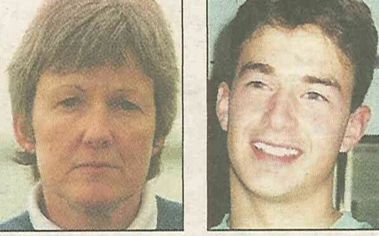 “It seems odd to me that while we MOT our cars every year we don’t do a single check on a part of our body as essential as the heart,” she said.

“CRY estimates that at least 400 people under 35 die each year as a result of Sudden Death Syndrome but we believe that the majority of these deaths could be avoided if basic cardiac screening was more widely available.

“The aim of the initiative at Tendring Technology College is to check for one of the hidden condition which can, if undetected, cause SDS in apparently fit and active young people.”

The cost of testing students at Tendring Technology College will be met from the fundraising efforts of CRY.

Jackie Bryden, assistant director of studies at the college, said: When Andrew died we simply no idea that someone so young could die so suddenly because of a heart problem.”

“Over the years, we have supported Caroline’s fundraising efforts and we are keen to do all that we can to look after our students and support them.”

CRY has run regular heart screening clinics for people aged 14-35 at Colchester General Hospital for more than three years. The next one will be held on September 29.