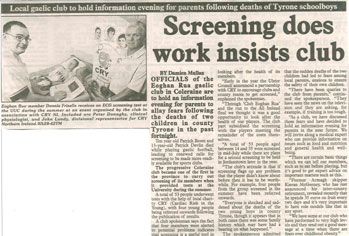 Officials of the Eoghan Rua gaelic club in Coleraine are to hold an information evening for parents to allay fears following the deaths of two children in county Tyrone in the past fortnight.

The progressive Coleraine club became one of the first in the province to carry out screening of its members when it provided tests at the University during the summer.

A total of 53 people underwent tests with the help of local charity CRY (Cardiac Risk in the Young), with four young people being referred onward following the publication of results.

A club spokesman says the fact that four members were alerted to potential problems indicates that screening is a useful tool in looking after the health of its members.

"Early in the year the Ulster Council announced a partnership with CRY to encourage clubs and county teams to get screened," explained the spokesman.

"Through 'Club Eoghan Rua' and the run to the All Ireland final we thought it was a good opportunity to look after the health of our players. The club part subsidised the screening with the players meeting the remainder of the costs themselves.

"A total of 53 people aged between 14 and 35 were screened in mid-July while there are plans for a second screening to be held in Jordanstown later in the year.

"The club's attitude is that if screening flags up any problems that the player didn't know about before then it has to be worthwhile. For example, four people from the group screened in the summer have been referred onwards. 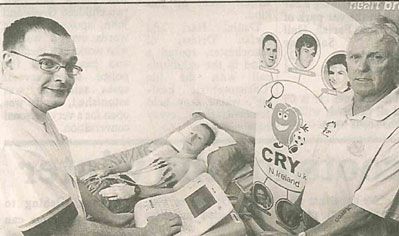 "Everyone is shocked and saddened about the deaths of the two young boys in county Tyrone, though it appears that in both cases there was some family history which may have had a bearing on what happened."

The spokesperson admitted that the sudden deaths of the two children had led to fears among local parents, anxious to ensure the safety of their own children.

"There have been queries to the club from parents," continued the spokesperson.

"They have seen the news on the television and they are asking, for example, if training is too tough.

"As a club, we have discussed these fears and have decided to hold an information evening for parents in the near future. We will invite along a medical expert who can provide information on issues such as food and nutrition and general health and well-being.

"There are certain basic things we can tell our members, such as to ear before playing, but it's good to get expert advice on important matters such as this.

Kieran McGeeney who has just announced his inter-county retirement, revealed recently that he spends 35 euros on fruit every two days and it's very important to have role models like that in any sport.

"We have some at our club who have performed to very high levels and they send out a good message at a time when there are fears over childhood obesity."