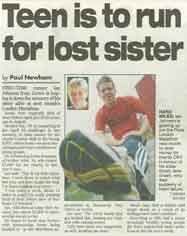 First-time runner Ian Johnson from Crewe is hoping to keep the memory of his sister alive at next month's marathon.

Brother Ian, 19, is competing in the April 23 challenge, in her memory, to raise money for the charity Cardiac Risk in the Young (CRY) which funds research into undiagnosed heart conditions in young people.

He is following in the footsteps of brother John, 34, who raised £1,600 for the charity in last year's race.

Ian said: "This is my first marathon. I went down to watch John last year and just caught the bug. I've been training ever since.

Ian, who live at Lime Tree Avenue, has raised £2,000 in sponsorship money so far.

"He hopes to boost that further with sponsorship forms being handed out at the Morrison's supermarket in Dunwoody Way where he works.

Ian said: "The whole family has got behind this, helping me train and with raising money.

"CRY have been very supportive as well, sending me vests."

Sarah Jane died a sudden and tragic death as a result of an undiagnosed heart condition.

According to CRY, half a dozen seemingly healthy young people die from undetected heart problems in the UK every week.