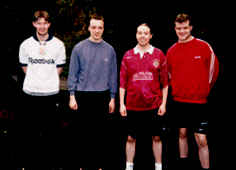 Too dizzy to talk. Lungs and heart fit to burst. Wouldn’t be too surprised if they already had to be quite honest. Legs insisting that they should, by rights, be detached from the body. It’s cold. It’s wet. We’ve just paid £3 a head to run up a big hill in the middle of December. However, if you were to ask any of us how we felt at that moment, you’d get answers like “proud” and “great”.

In order to get us to do anything, it takes something quite special to convince us, four out of shape twenty something’s, to commit any more effort than it takes to, say, raise a pint glass from table to mouth.

These days we all feel more at home in a pool hall rather than a sports hall, at the bar rather the park. Still, for just one day, as a group, we decided to move away from the warmth of a bar room fire, or from our respective front rooms, to do something a little more worthwhile.

You see, it has been pretty much six years since our friend David died. We were all about 17 or 18 when it happened, just after Christmas in 1994. No warning, no hint in anything said or done. He died during a run he was competing in. It’s been explained to us what happened – something was wrong with his heart. None of us could tell you the details, all we know and all that matters to us is that our friend is gone.

We were together that night, sharing a grief that we had never expected to experience at that stage of our lives. Since then, we have visited David’s parents once a year, on the anniversary of his death, to see how they are, and to let them know how we are all getting along. It has become a fixed annual event that everyone enjoys and looks forward to.

At the same time however, we have, as a group, managed to avoid running in the annual memorial race. You see, the way we look at it, it’s five miles of pure torture that we would have to be insane to actually want to take part in.

But we all knew that we would do it one day. And that was how the conversation always went ……” yeah, maybe next year ……”. Every year – without fail! And for the past few years that is how it has been.

This year, something changed. Fingers haven’t quite been put on it, but one suggestion is that , as we are starting to drift apart as a group (spread between Darwen, Bolton, St. Anne’s and Durham ), this might be our last chance of doing this together.

And that’s what it is about. We were all David’s friends. For one or two of us to run the race would mean a lot, but not the same as if we were ALL to do it.

We don’t want thanks for it as such. We don’t need congratulations on the finish line ( although first aid wouldn’t go amiss ) and we certainly don’t need medals or any kind of recognition.