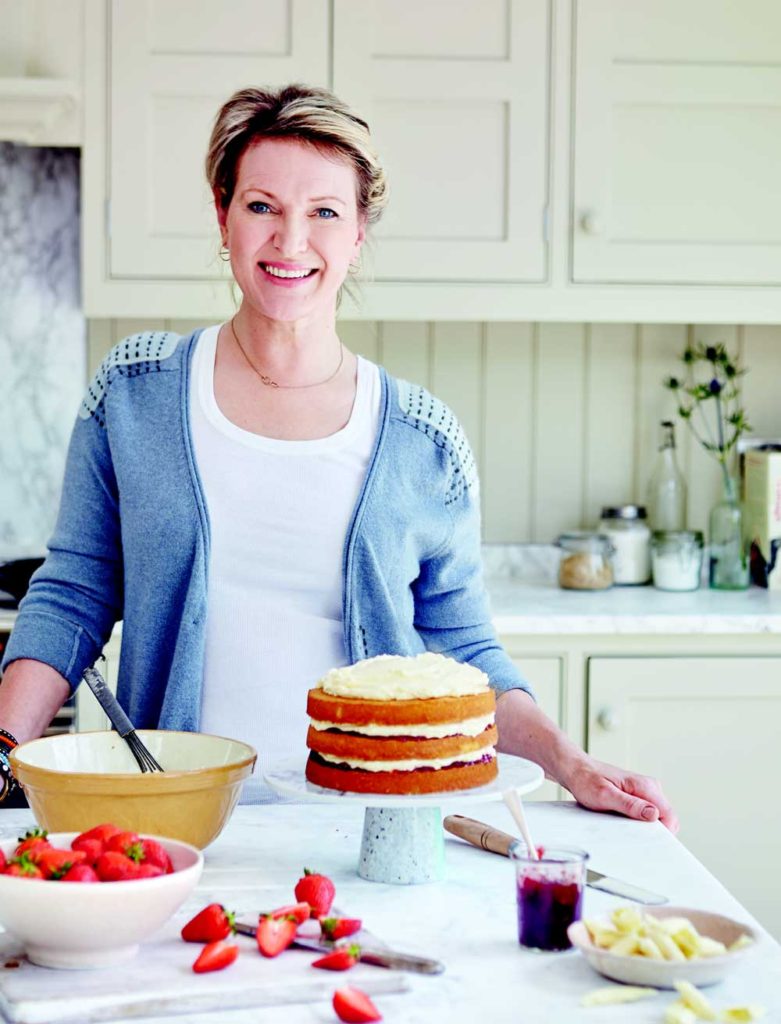 “If made in the autumn, dark blackberries and blackberry jam would make a stunning substitute for the strawberries, providing a striking dark contrast against the white icing and chocolate.”

Preheat the oven to 180°C (350°F) Gas mark 4. Grease the sides of the tins, and line the bases with baking parchment. Put the butter in a large bowl and cream it with a wooden spoon until soft, or use an electric beater on slow or a food processor. Add the sugar and beat until light and fluffy.

Whisk the egg whites and vanilla extract into the mixture well to add lightness. Sift half the flour and baking powder over the butter mixture and fold in. Add half the milk and fold again to combine. Repeat to add the remaining flour and milk, folding carefully so that you don’t knock all the air out of the mixture.

Divide the mixture evenly between the prepared tins and bake for 20 minutes until they are risen and light golden, and a skewer inserted into the centre comes out clean. Remove the cakes from the tins and leave on a wire rack to cool completely.

Meanwhile, make chocolate curls for the topping. Melt the chocolate in a heatproof bowl over a pan of gently simmering water, making sure the base of the bowl doesn’t touch the water, and stirring regularly. Spread thinly over the back of a baking sheet and leave it to cool in the fridge until firm but not fridge-hard.
Hold a long, sharp knife at the top of the baking sheet and tilt it at an angle towards you with one hand on the handle and the other at the top of the blade. Very carefully, pull the knife towards you, scraping the chocolate as you go. Curls should start to peel up from the sheet. If it crumbles, the chocolate is too cold, if it goes gooey, it’s too warm. Keep scraping until all the chocolate is shaved and you have enough curls for the top of the cake. Leave somewhere cool until
needed.

To make the white chocolate buttercream, melt the chocolate as before, then leave to cool. Fill a pan one-third full with water and bring it to the boil. Put the egg whites in a grease-free, heatproof glass bowl and sift in the icing sugar. Take the pan from the heat and put the bowl over the pan. Whisk the egg mixture over the hot water using an electric beater unril you have stiff peaks.

Remove the bowl from the pan and whisk until completely cold. At this point begin to add the butter, one piece at a time and whisking in before adding the next. This will take about 5 minutes. Once you have added all the butter, whisk in the melted and cooled white chocolate.

Arrange the strawberries around the outside of the cake, cutting larger ones in half, but leaving some whole. Pile the chocolate curls into the middle of the cake and add a few fresh flowers. Dust the cake with icing sugar and serve.