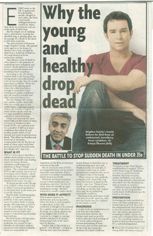 Every week in the UK, 12 apparently fit and healthy people, all aged 35 and under, die from a previously undiagnosed heart condition. Often they show no symptoms and are at the peak of their lives.

but the simple act of walking into a cold shower, hearing the doorbell ring or playing sport can be enough of a shock to the heart to kill them instantly.

The post-mortem of Boyzone singer Stephen Gately, who passed away aged 33, at his house in Majorca last week, revealed he died from a build-up of fluid on his lungs known as acute pulmonary oedema.

The obscure cause of death is often linked to the presence of underlying heart complaint and Gately’s family believe he died from a previously undetected, hereditary condition.

According to the UK charity Cardiac Risk in the Young (CRY), young people can walk around with no knowledge they are at risk from heart problems.

“Many are affected while playing sport, where the exertion is enough to exacerbate a pre-existing and cardiac condition,” says the charity’s founder and chief executive Alison Cox.

The UK charity CRY reckon that sudden cardiac death kills over 600 people aged 35 and under a year – although experts believe the number is higher as many sudden death cases are wrongly recorded as asthma, epilepsy or even drowning.

Gately was certainly the most recent high-profile victim of what is known as Sudden Cardiac Death (SCD) – an umbrella terms for a number of a different heart conditions that affect fit and healthy people which, is not treated, can result in spontaneous death.

“The effect on families and loved ones is immense, compounded only by the fact so many of these cases could have been prevented if detected early by a simple test,” says Cox.

SCD is a term used to describe a sudden death within 12 hours of usual, normal health, says leading expert Dr Sanjay Sharma, consultant cardiologist and physician at King’s College London. “The commonest cause of SCD in older people, say 50 to 70, is coronary artery disease, which is usually due to smoking or high cholesterol and causes blocked arteries in the heart,” he says.

“In young people under the age of 35, sudden cardiac death is due to either a structural problem or an electrical fault in the heart and is usually inherited.”

Hypertrophic Cardiomyopathy ((HCM), a so-called structural problem, is the most common cause of sudden death in young people, affecting some 10,000 in the UK, according to CRY. Gene abnormalities cause the heart muscle to become thick and render it vulnerable to potentially fatal rhythms.

Electrical faults with the heart, however, such as Long QT syndrome, are caused by rare disorders in the body’s sodium, potassium and calcium channels, which are responsible for regulation of the flow of electrical currents to the cells. 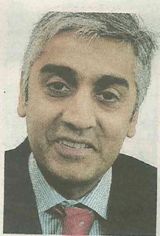 But in one in 20 cases of SCD, no recognised cause can be found, even after post-mortem. This is referred to as Sudden Arrhythmic Death Syndrome (SADS).

Whatever the heart condition, young victims usually have no symptoms, says Cox. “In 80% of cases, there are usually no signs anything is wrong – the first symptom is usually sudden death.”

WHO DOES IT AFFECT?

SCD is most common in adolescents and young adults, when the body is most sensitive to adrenaline. In fact, the condition is thought to be stressed by a sudden surge of adrenaline to the body. As a result, athletes are at the highest risk of SCD, as “exercise is a trigger in causing rhythm imbalances in people harbouring faults in the heart”, says Dr Sharma.

Cardiac Risk in the Young is a genetic – not lifestyle – condition. Delving into your own family’s health history is therefore key to understanding your own risk.

Stephen Gately for example, is reported to have had an undiagnosed heart condition that ran in his father’s side of the family.

“When someone dies suddenly, as Stephen did, alarm bells ring about the history of death in the family,” says Cox. “Think of your family and any sudden deaths, including cot deaths, that suggest there may be an underlying inheritable condition.”

Knowing such particulars could save your own life, says Cox, who saw one family lose two children in two weeks to SCD.

A simple medical examination can help find any inheritable structural heart disease. But further tests, such as an ECG (which takes electrical readings of the heart), echocardiograms (ultrasound looking at heart structure), and exercise tests can also help determine the presence of a heart condition.

Treatments range from lifestyle modifications to surgery. “If you suffer from Long QT syndrome you have to avoid strenuous exercise loud pop concerts, certain antibiotics, and refrain from using substances that increase adrenaline into the bloodstream, such as ecstasy or cocaine.”

Medication such as beta blockers can help. An ICD (Implantable Cardioverter Defibrillator) may be fitted in the chest.

Screenings are only provided for those who have symptoms or a family history of SCD. But CRY has announced the first initiative in the UK to screen every 14-year-old – the earliest age proactive screening is viable – across the south east of England from early 2010. The screening initiative is hoped to help lay the foundations for a national programme.