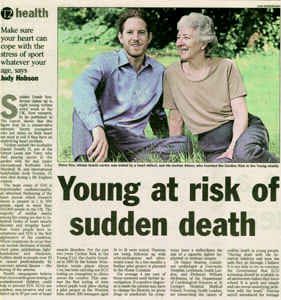 Sudden Death Syndrome claims up to eight young victims every week in the UK. New research, to be published in The Lancet, shows that this figure may be a conservative estimate. Sporty youngsters who put stress on their heart are most at risk if they have

include the footballer Daniel Yorath, 15, son of the former Leeds star Terry,

who died playing soccer in the garden with his dad, junior international

died during a Mr England contest.

main cause of SDS is hypertrophic cardiomyopathy, an abnormal thickening of the

heart muscle which research shows is present in 1 in 500 people, equal to more

than 100,000 people in the UK. The majority of sudden deaths among the young are

due to inherited forms of heart muscle disorder and irregular heartbeat. Some

people have no symptoms and SDS is the first appearance of the condition. Where

symptoms do occur they can include shortness of breath, chest pains,

palpitations, light-headedness and blackouts. Sudden death in people over 30 is